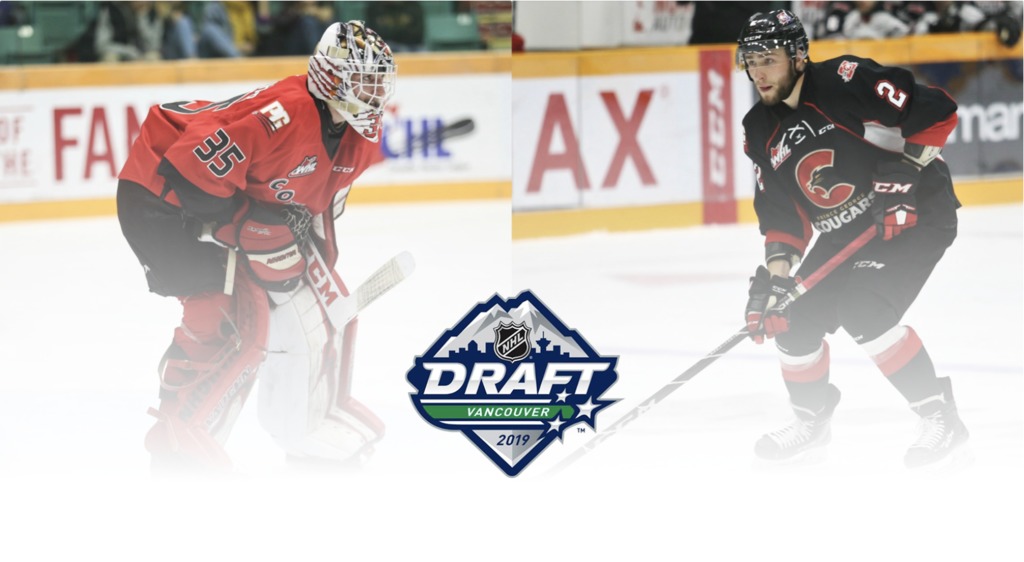 The 2019 NHL Draft goes this weekend, June 21st and 22nd, at Rogers Arena in Vancouver and a pair of Cougars may very well have their names called at the podium. Two Cougars were listed in NHL Central Scouting’s Final Draft Rankings in April.

Goaltender Taylor Gauthier is ranked 7th among North American Goalies and is looking to be the first Cougars’ goaltender to be drafted since Justin Pogge, who was taken by the Toronto Maple Leafs, in the third-round, 90th overall, in 2004. Pogge so happens to be his boyhood idol. Pogge played part of his WHL career with the Calgary Hitmen, which is where Gauthier grew up.

“He started it all for me,” he said in a recent article by Scott Cruickshank in the The Athletic . “I’d still be starstruck if I met Justin Pogge, just because of the impact he’s had on my life. I’d watch him and go home and try to mirror everything that he did. I’d watch highlights — anything I could get my hands on — then try to replicate it.”

Gauthier’s sophomore numbers may not jump out at you, but he is the first to admit he’s not one to get wrapped up in numbers. You can however, point to his three shutouts, which were tied for sixth in the WHL and he did face the fourth-most shots (1663) and was fourth overall in saves (1495). He also has an impressive international resume, having played for Team Canada in the World Under-17 Hockey Challenge, Hlinka-Gretzky Cup and most recently the World Under-18 Hockey Championship. He won gold at the Hlinka-Gretzky Cup last August and helped Canada to a fourth-place finish at the U-18’s in Sweden in April.

His play has caught the attention of draft pundits, as The Athletic’s Corey Pronman said this in his 2019 draft rankings, “He is the most athletic goalie in this draft class by a wide margin. He has game-stealing capabilities and is a regular on the highlight reel. His side-to-side movements are elite, he’s a right glove who can snag for-sure goals out of the air and overall he can make tough saves consistently.”

The southpaw puck-stopper should certainly hear is name called in Vancouver this weekend.

Defenceman Cole Moberg is ranked 136th among North American Skaters. Quite the feat, considering where he’s come from. You could say he has flown under the radar through his young hockey career. He was passed over in his Bantam Draft year and then, in his Major Midget season, he was limited to just 20 games due to a spleen injury. Those hurdles didn’t detour the blue-liner as he was signed by the Cougars in 2016, despite being limited to a handful of games. They saw something. He went from playing just 20 games in his Major Midget season, as a 16-year-old, to playing 61 games as a 17-year-old rookie in the WHL. It was in his sophomore season where he made a name for himself.

The North Vancouver product had a career year in 2018-2019, leading the offence from the blue-line. He set career highs in goals (13), assists (27) and points (40). He also ended the season on a strong note, as he had seven points in the final eight games. Moberg said confidence played a big factor in his breakout season, “I started to realize I was on the draft radar and started to believe I could get drafted if I kept putting the work in. I pride myself on my work ethic and I never stopped trying to better my game and I think it paid off.”

Moberg is projected as a potential late-round pick, but the possibility of getting his name called in his hometown would be a full circle moment for the speedy defenceman, “It would mean a lot, It’s where I grew up and grew up playing hockey. To have one of the goals I set out for myself happen where it all started for me, it would be exceptional.”

His breakout year was highlighted by his end-to-end goal against the Lethbridge Hurricanes in October. That goal spread quickly on social media and was the WHL’s representative in the CHL-wide CIBC Showdown for Week 4. The goal went on to win the Cougars’ Plays of the Year contest, which Moberg said was a nice feather in the cap. “It feels nice to get that publicity. When you’re in the game you don’t think about it that much, but after seeing how it got a lot of attention, it was humbling to get that recognition.”

If Moberg’s name is called this weekend at Rogers Arena, he won’t be in the building, even though he lives just 20-minutes away. He says he’ll follow the draft from home as he’s not trying to think about it too much. Though he said he can get there in a hurry if need be. No one will doubt that after watching him on the ice.

For the 2019 NHL Draft schedule and broadcast information, click here.