2021 Training Camp: The long wait is finally over 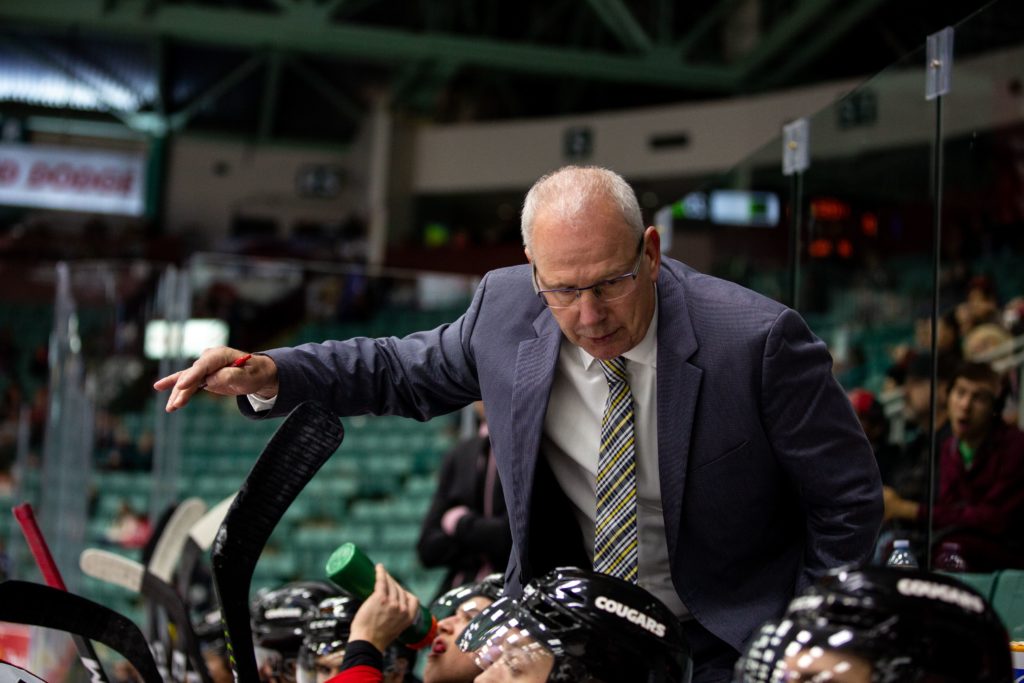 The long wait is nearly over. The Prince George Cougars are set to open their Training Camp tomorrow at the CN Centre. It’s been two years and 17 days since the Cougars last held a camp on home ice and the excitement is palpable.

“It really is. Bob Simmonds (Director of Scouting) got into town Tuesday and said the same thing,” said Cougars General Manager & Head Coach Mark Lamb. “It’s been a couple of years since our scouts were involved. It’s been so long that there are scouts and players from our last draft class I have yet to meet. The excitement is over the top.”

48 players are attending this year’s Training Camp that runs through the weekend. 29 forwards, 15 defencemen and four goalies will be split into three teams that will each play four games. Though on the camp roster, goaltender Taylor Gauthier (Toronto) and defenceman Ethan Samson (Philadelphia) will be absent as they are attending NHL Development Camps.

The Cougars have 20 players returning from last season’s squad that finished with a 9-10-2-1 record in the BC Division Hub. It was a unique season, as the five BC Division teams played in Kamloops and Kelowna. 11 forwards, six defencemen and three goalies are returning from that squad. Despite a huge returning core, Lamb expects competition to be very high once the puck drops at Training Camp.

“Last year, when we were going into the hub, the players that were with us were on the team. I like when there’s competition. It’s going to be a very competitive camp and the kids coming in are going to have to show what they can do and find a role. That’s what makes Training Camp so exciting.”

Speaking of competition, the Cougars are currently carrying five 20-year-old players in goaltender Taylor Gauthier, defenceman Majid Kaddoura and forwards Connor Bowie, Jonny Hooker and Tyson Upper. The team will have to get down to three when the Regular Season rolls around on October 2nd. Lamb expects those veterans to force he and his staff into some tough choices, “I’ve talked to our 20-year-olds about the situation. I’ve got a lot of respect for all of them. With that being said, it’s going to be very competitive amongst those five to find a spot on the team. They know how we run things here. Any one of them could play on our team. It’s going to come down to the right fit.”

Even with nearly half a dozen 20-year-olds in the fold right now, the Cougars’ bench boss hinted that his team could be even younger than the one they had in the hub in the spring. A roster that was the second-youngest in the entire WHL, “We’re going to be a very young team again. Probably the youngest team the Cougars have ever had. So, patience must be there, and the competitive spirit must be there. I think the players we have drafted over the last few years have all that.”

Despite their experiences in the hub last spring, Training Camp will present a whole new experience for some of the younger Cougars, “It’s going to be different, especially those that came into the hub. As hard as the hub was, the hockey part was easy. It’s going to be a lot different now and the WHL is a rollercoaster. There’s a lot of highs and lows through a full season. The young guys that were in the hub will have to adjust to a camp.”

As always, there will be a few surprises. Two to watch for would be 2020 WHL Prospect Draft first-round selections in forwards Caden Brown and Ryker Singer. The Cougars’ brass is also eager to see their 2021 CHL Import Draft selections in forward Liekit Reichle and defenceman Jozef Viliam Kmec. Lamb admits there’s a lot of moving parts.