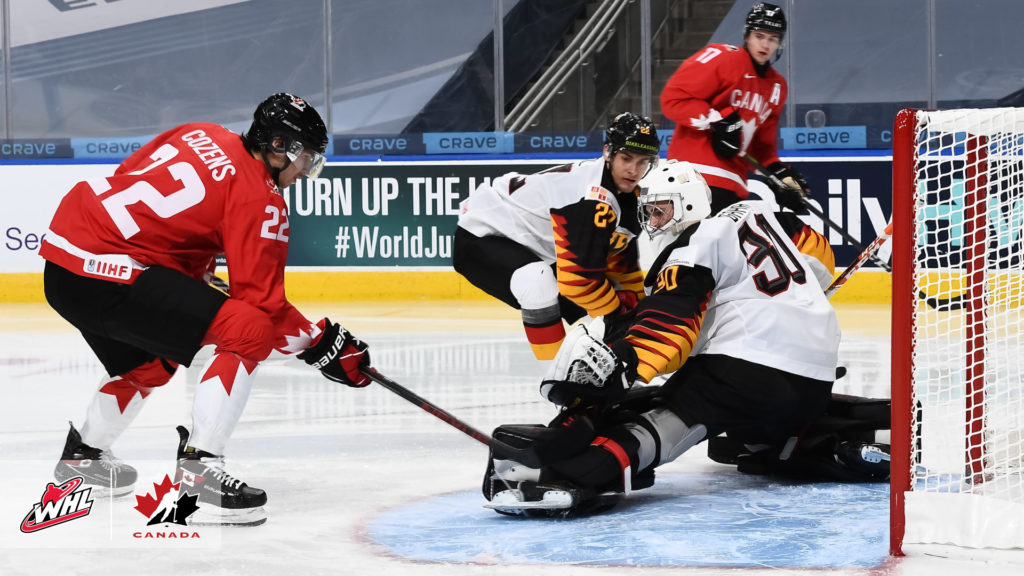 Edmonton, Alta. – Lethbridge Hurricanes star Dylan Cozens registered six points, including three goals, and was named Player of the Game as Canada skated to a decisive 16-2 victory over Germany on Saturday at the 2021 IIHF World Junior Championship.

Cozens, a product of Whitehorse, Yukon, registered his first goal of the contest after it was far out of reach for Germany. The prospect of the Buffalo Sabres skated in alone on a breakaway, beating German goaltender Jonas Gahr as Canada hit double digits, making it a 10-1 game.

The opening minute of the third period saw Cozens convert on a power-play opportunity to give Canada a commanding 12-1 advantage. Cozens completed the tournament’s first hat trick minutes later to make it 13-1.

Aside from Cozens’ offensive dominance, Canada enjoyed plenty of WHL flavour in its scoring on Saturday night.

Prince Albert Raiders defenceman Kaiden Guhle, a prospect of the Montreal Canadiens, opened the scoring for Canada, registering his first of the tournament 1:54 into the first period of play.

Winnipeg ICE captain Peyton Krebs rounded out the scoring for Canada in opening 20, knocking home a loose puck in the dying moments of the first period to give his country a 4-1 advantage.

Adding insult to injury, Canada’s newly-named co-captain Bowen Byram set up Krebs, a prospect of the Vegas Golden Knights, for his second of the evening, making it an 11-1 affair after 40 minutes of play. Krebs, a product of Okotoks, Alta., finished the night with three points (2G-1A).

With the decision clearly determined, Canada opted to give goaltender Dylan Garand, a prospect of the New York Rangers, an opportunity to get in the game. The Kamloops Blazers netminder spent the first two periods on the bench, before taking to the blue paint for the third period.

Our guy Kaiden Guhle gets the first goal of the tournament for Canada! #WorldJuniors @PARaidersHockey https://t.co/in0SE4HA0j

World Juniors News & Notes: Brandon Wheat Kings defenceman Braden Schneider was ejected from Canada’s win after receiving a Checking to the Head major penalty… Everett Silvertips goaltender Dustin Wolf came on in relief for the United States in Friday’s 5-3 loss to Russia, and was scheduled to get the start for Saturday evening’s contest with Austria…

? (co-)Captain Canada ?@WHLGiants star @BowenByram steps onto the ice with the ‘C’ for the first time. #WorldJuniors