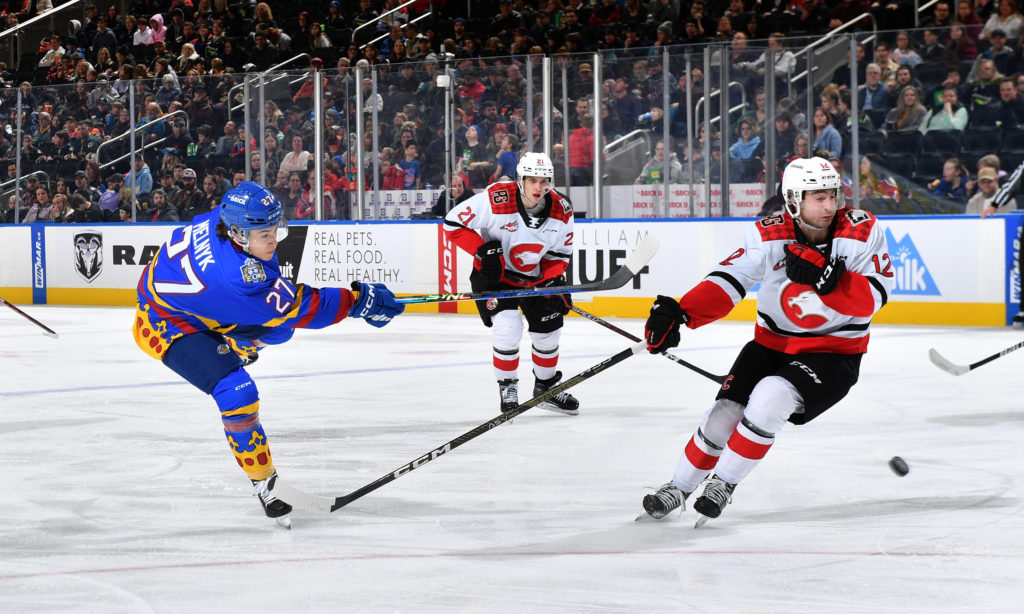 Edmonton AB – The Prince George Cougars capped off their 7-game road trip with an overtime victory over the Edmonton Oil Kings, Saturday at Rogers Place.

Koehn Ziemmer scored twice in the win, and Chase Wheatcroft delivered the overtime winner. Zac Funk also had a goal, while Ty Young made 30 saves for his 11th victory of the season.

Edmonton had the lone goal in the opening period when former Cougar Noah Boyko scored his 11th of the season. Despite outshooting Edmonton 13-10, the Cougars trailed 1-0 after the first.

In the second, the Cougars found the equalizer on the power-play from Koehn Ziemmer at the 14:04 mark. The Oil Kings responded in a hurry, taking the lead just over a minute later. Cole Miller fired in his seventh of the season to make it 2-1. The Cats went down a goal after two periods.

In the third, Koehn Ziemmer and Zac Funk combined for a highlight reel goal to get the game tied. Funk’s second goal as a Cougar came just under 4:30 into the period. Just over three minutes after that, Ziemmer hammered a shot from the slot by Kolby Hay to give the Cougars their first lead of the night. In the final minutes of the period, the Cougars began a parade to the penalty box and the Oil Kings made them pay. Marshall Finnie ripped a one timer in the slot and on the power-play to tie the game at three at 15:45 to ultimately force overtime.

In the overtime frame, it took just 46 seconds for the Cougars to seal it. Jaxsen Wiebe made a phenomenal pass to Chase Wheatcroft in the slot, and he ripped right under the cross bar to give the Cougars an overtime win.

-Koehn Ziemmer has six goals in his last three games

Next Game: Saturday, January 28th  at home when PG hosts the Prince Albert Raiders at 6:00 PM.