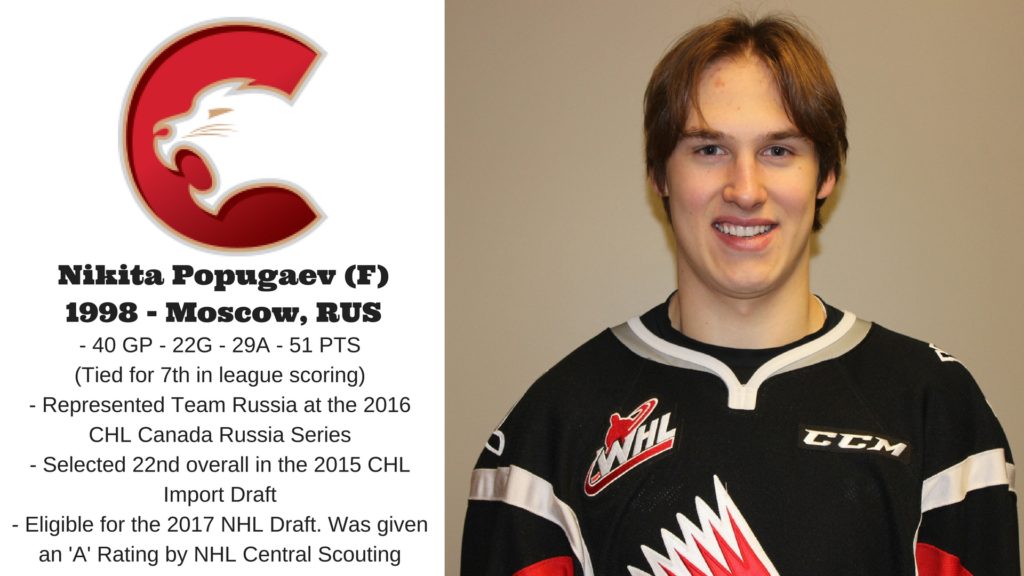 Popugaev, a right-handed shot, checks in a 6’5” and 202 pounds. He has scored 22 goals while adding 29 assists for 51 points in 40 games this season with Moose Jaw which puts him tied for seventh in WHL scoring. In 110 career WHL games (all with the Warriors) he has 38 goals, 60 assists and 42 penalty minutes and added two goals and two assists in six playoff games last season.

Internationally he represented Team Russia during the 2016 CHL Canada Russia Series and will be suiting up for Team Orr in the 2017 Sherwin-Williams CHL NHL Top Prospects Game which takes place on January 30th in Quebec City. Popugaev was selected 22nd overall by the Warriors in the 2015 CHL Import Draft and is entering his first year of NHL draft eligibility. NHL Central Scouting’s 2017 Preliminary Player’s to Watch List gave Popugaev an ‘A’ rating which indicates a potential first round candidate.

“We’ve added a player to our lineup that can be an offensive game-changer for us,” said Cougars General Manager Todd Harkins. “Nikita is one of the most skilled and dominant offensive players in the Western Hockey League and he’s got a tremendously bright future in the game. He makes us better in all areas and he will play a big part in our success not only this year, but next season as well.”

Harkins adds, “Both Yan Khomenko and Justin Almeida have been great soldiers for us this season and I know that both are going to step in and be impact players for the Moose Jaw Warriors. But when the opportunity came up to add a player like Nikita Popugaev to the Prince George Cougars organization we couldn’t afford not to make this deal. We’re thrilled to have Nikita join the Prince George Cougars.”