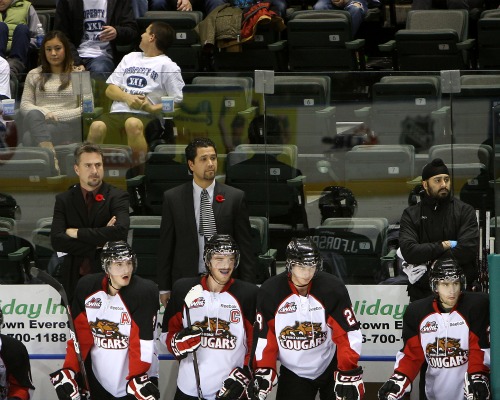 Cougars General Manager Dallas Thompson made a big splash early when he acquired the second overall pick in the 2012 draft from the Prince Albert Raiders. In exchange, the Cougars parted ways with the third overall pick and also a third rounder in 2013.

The Cougars used the second overall selection to draft forward Jansen Harkins out of North Vancouver. Harkins stands 5’11” and 160 pounds and played with the North Shore Winterclub Winterhawks this past season. Harkins tallied 68 goals and 122 points this season for the Winterhawks.

“The best word to describe him is ‘complete,’” said Prince George Cougars Assistant General Manager and Director of Player Personnel, Wade Klippenstein. “We really like his character. He’s definitely a franchise guy.”

“I was pretty delighted,” said Harkins. “I know if they moved up one spot to get me, that they wanted me pretty bad. I’m happy.”

Harkins called Ryan Kesler and Henrik Zetterberg two of his favorite players. He does his best to model his game after both of them.

Harkins has some strong hockey bloodlines. His father Todd Harkins played 10 seasons of professional hockey, including some time with both the Calgary Flames and the Hartford Whalers.

Moments later, the Cougars made another major move when they acquired the seventh overall pick in the 2012 draft, along with Prince George product Jari Erricson from Everett in exchange for the rights to Jujar Khaira, the 11th overall pick and a 2012 third round pick.

They used the seventh overall selection to pick forward Brad Morrison out of West Kelowna. Morrison (5’9”, 140 pounds) scored 83 goals and finished with 141 points with the Okanagan Hockey Academy.

“He’s a very dynamic player,” said Prince George Cougars Assistant General Manager and Director of Player Personnel, Wade Klippenstein. “He scores goals, and that’s an area that we want to get better in. He’s a natural goal scorer.”

“It’s an honor for a team to trade up,” said Brad Morrison who has ties to the Prince George area. “I lived there for 12 years. It’s going to be very exciting to be there for the next for our five years.”

In Ericcson, the Cougars acquire a local forward who scored six goals and recorded 19 points in 69 games last season with Everett. Erricson (5’11”, 172 pounds) has recorded 33 career points in 129 career games in the Western Hockey League.

“Nobody ever expects to be traded, but coming to my hometown team makes it that much easier,” said Erricson. “I’m definitely looking forward to playing here.”

The Cougars took defenceman Tate Olson early (24th overall) in the second round. Olson (6’1”, 157 pounds) played with the Saskatoon Stallions this season where he scored 21 goals, and added 29 assists in 36 games.

“I like to jump up in the play and get involved on offense,” said Olson who highlighted Los Angeles Kings defenceman Drew Doughty as one of his favorite defencemen.

Late in the second round, the Cougars picked forward Aaron Boyd (43rd overall) out of Winnipeg. Boyd (6’0”, 153 pounds) played for the Winnipeg Hawks (Bantam AAA, Division 1) last season, and scored 16 goals and 35 points in 30 games. Boyd was the first Manitoba prospect selected by the Cougars in 2012.

In the third round, the Cougars used the 62nd overall selection (acquired from Moose Jaw) to grab defenceman Shane Collins of Rosetown, Saskatchewan. Collins (6’0”, 161 pounds) played with the West Central Wheat Kings and managed eight goals and 34 points in 24 games this season. Collins added six points in two playoff games.

Ehrhardt (6’4”, 210 pounds) has spent the majority of his WHL career with the Moose Jaw Warriors. In 67 games last season, Ehrhardt posted a career high in goals (4) and points (22) along with 78 penalty minutes. He also added three points in 14 playoff games this season with the Warriors.

“At first I was shocked, but the Cougars are a young, developing team that is getting better. So it should be fun to be a part of the organization,” said Ehrhardt. “I’m coming off my best year so far. I’m feeling good moving ahead, and next year will be even better.”

Another forward was selected in the fifth round (92nd overall) when the Cougars drafted winger Ethan Waitzner from Victoria. Waitzner (6’3”, 175 pounds) spent last season with the Victoria Racquet Club Tier 1 Bantam squad where he scored 19 goals, and totalled 61 points in 41 games. Waitzner also had 78 penalty minutes.

In the eighth round, the Prince George Cougars added another blueliner to the fold. They selected St. Albert product Stephen Wack with the 156th overall pick. Wack (6’2”, 162 pounds) played for St. Albert and posted two assists and 26 penalty minutes in 32 games this season.

With their ninth round selection, the Prince George Cougars went back to British Columbia and drafted forward Dylan McCann 178th. McCann scored six goals and tallied 12 points in 20 games this season with the Cloverdale Tier 1 Bantam program.

Phillips was the fourth defencemen selected by the Cougars during the 2012 draft.

Pitlick was the sixth and final forward selected by the Cougars in the 2012 WHL Bantam Draft.

In the end, the Cougars selected six forwards, four defencemen and one goaltender. There were four players selected from B.C., three from Saskatchewan, two from the United States, and one each from Alberta and Manitoba.

“We made ourselves better today,” said Prince George Cougars General Manager, Dallas Thompson. “Not only are we happy with our draft, but we added two pretty good players (Erricson, and Ehrhardt) that we’re very excited about.” 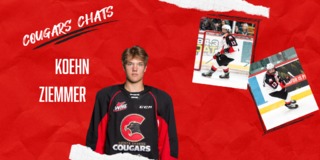 Statement from the Canadian Hockey League
2 weeks ago