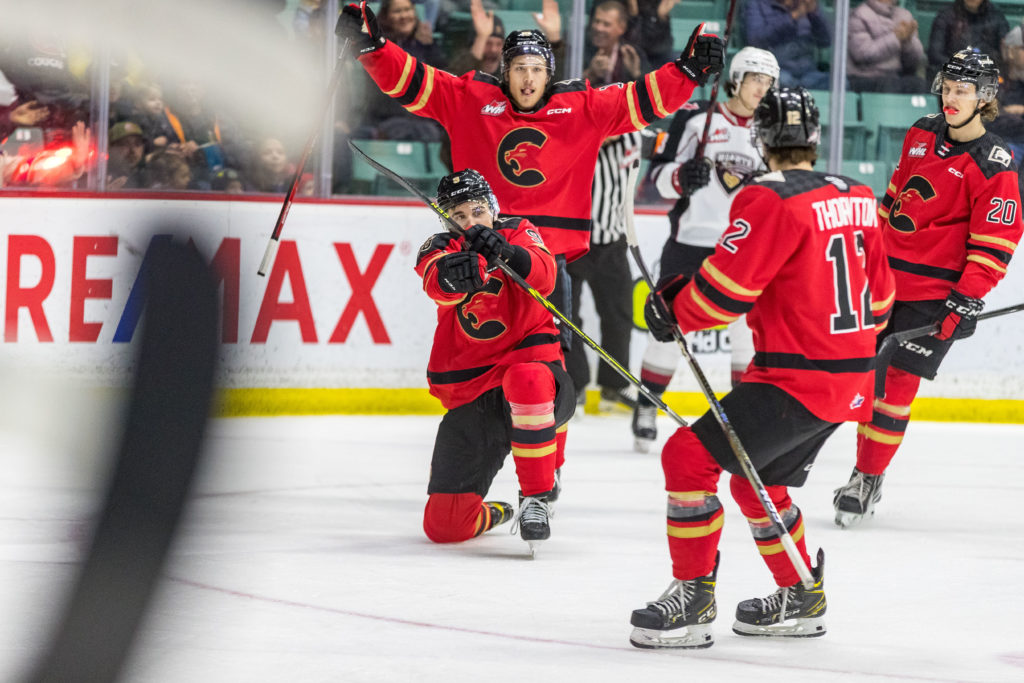 Another week in the books and another week at the top of the BC Division. The Prince George Cougars are coming off an impressive weekend, collecting four points against the Victoria Royals while out-scoring them 14-3 in that span.

On Friday night, the Cougars clobbered the Royals 9-1 and were led by a career night from Hudson Thornton. Thornton finished the evening with six points, including a hat-trick and three assists. Thornton is the first Cougars’ defenceman to score a hat-trick since Dustin Byfuglien in December of 2004. Riley Heidt continued his excellent play adding three assists and earning second-star honours. Prince George also had a couple of firsts with Keaton Dowhaniuk (two goals) and Viliam Kmec scoring their first goals of the regular season. 15 out of the 18 Cougars skaters were able to find the scoresheet in the victory. In between the pipes, Ty Young earned his sixth victory of the season, making 21 saves.

The following night the Cougars picked up where they left off, scoring four goals in the second period, leading them to a 5-2 win over Victoria. Cole Dubinsky led the way offensively for the Cats, scoring two goals and receiving first-star honours. Dubinsky has scored six times in five games since joining the Cougars roster. Hudson Thornton and Koehn Ziemmer extended their point streaks in the win. Both Cougars skaters now have points in 13 straight games. The most talked about part of this game, however, was what occurred at the final buzzer with an old-school line brawl that included five different fights and resulted in over 150 penalty minutes.

The Cougars now enter their third straight week at the top of the BC Division with a 12-9-0-0 record. The Kamloops Blazers sit behind the Cougars in second place and are just two points back.

The Cougars will return home to take on the Moose Jaw Warriors on Wednesday, November 23rd at 7:00 PM. The Warriors have had a terrific start to the season, sitting 4th in the Eastern Conference. The Warriors’ duo of Jagger Firkus and Brayden Yager have combined for 45 points in the teams’ first 19 games of the season. Firkus was drafted in the 2nd round of the 2022 NHL Entry Draft by the Seattle Kraken while Yager is projected to be a high pick in the first round of the 2023 Draft.

Wednesday night will be Plaid Night at the CN Centre presented by Downtown Prince George. Wear plaid to the game for a chance to win a stay-cation prize packs brought to you by hotels and businesses in downtown Prince George. Visit Downtown PG’s concourse kiosk to get plaid toques and bags, by donation, with proceeds going to Community Partners Adjusting Homelessness (CPAH).

On Saturday, November 26th, the Cougars will welcome the 2023 Memorial Cup hosts, Kamloops Blazers to the CN Centre for a 6:00 pm game. The Blazers currently sit in 2nd place behind the Cougars in the BC Division. The Blazers’ roster features 6 NHL draft picks that power their fast-paced offence. The last time these two teams met, Ty Young made 48 saves and Hudson Thornton scored two goals to lift the Cougars over the Blazers 4-3 in overtime.

Tickets for all Cougars home games are available online at ticketsnorth.ca, by phone at 236-423-1157 or visit the TicketsNorth box office at CN Centre. Box office hours are 12:00 pm to 6:00 pm Tuesday-Friday, and noon to 2nd Intermission on game days.

We can’t wait to have you here this week!

See you at the CN!