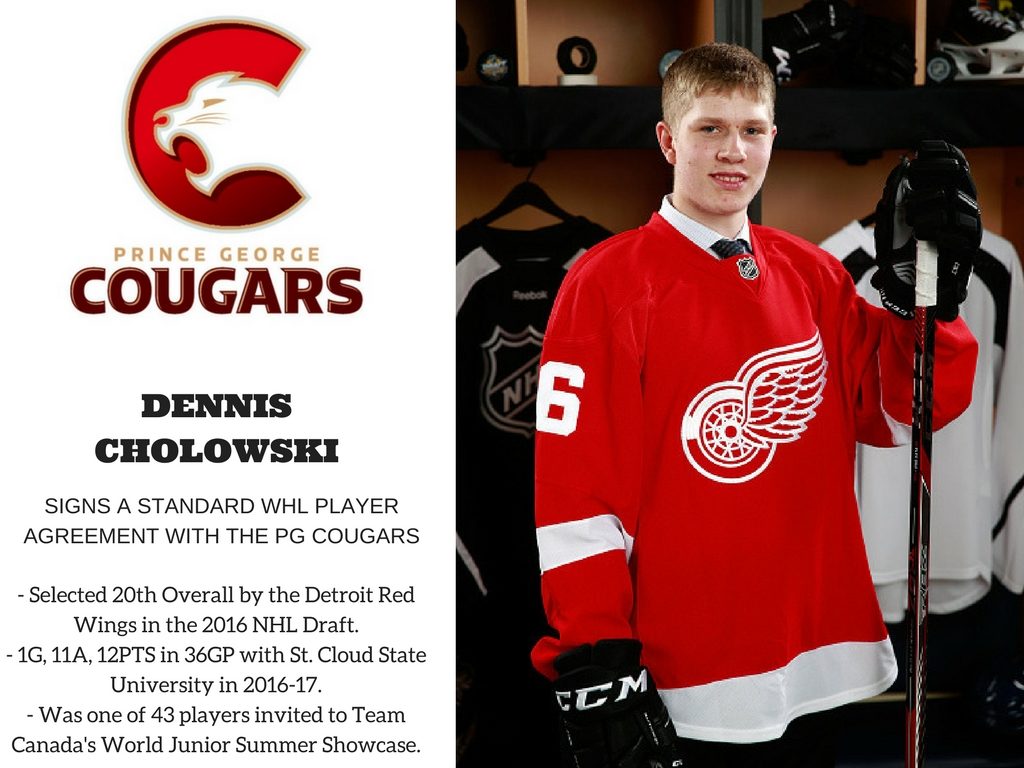 Originally selected by the Cougars in the 10th round (200th Overall) in the 2013 WHL Bantam Draft, the 6’0”, 170 pound Cholowski is one season removed from being selected 20th overall by the Detroit Red Wings in the 2016 NHL Draft. Last season with St. Cloud State (NCAA) he scored a goal and 11 assists for 12 points in 36 games. Back in April he signed a three-year entry-level contract with the Red Wings ending his NCAA eligibility. He spent each of the two previous seasons in the BCHL with the Chilliwack Chiefs and was named a BCHL second team all-star in 2015-16 after scoring 12 goals and 28 assists for 40 points in 51 games. That same season he added four goals and 11 assists for 15 points in 20 playoff games.

Internationally Cholowski captured a gold medal with Canada at the 2015-16 World Junior A. Challenge and in June, 2017 he was one of 43 players invited to attend Team Canada’s World Junior Summer Showcase which took place from July 29th – August 5th in Plymouth, MI. Of those 43 players, 13 (including Cholowski) were defencemen.

“Ever since we drafted Dennis back in 2013, we’ve kept a close eye on his development and have been in regular communication with his family, his agency and the Detroit Red Wings. To now have him signed and committed to the Prince George Cougars for 2016-17 is very exciting for our franchise,” said Cougars General Manager, Todd Harkins. “Dennis is a world-class player who we expect will log major minutes for us in all situations and our goal is to help further develop his game so that he’s ready to take the ice for the Detroit Red Wings as soon as possible.”

Harkins, who has scouted Cholowski throughout his minor hockey career in the Lower Mainland adds, “He is an extremely smart and well-spoken young man and he’s going to fit in very well with our current roster and our coaching staff. We are very pleased to welcome Dennis and the Cholowski family to the Prince George Cougars organization.”

Season Memberships for the 2017-18 season are now available and enjoying a full season of the BEST hockey in town has never been more affordable! For more information please visit: http://pgcougars.com/season-memberships/ or call (250) 561-0783.