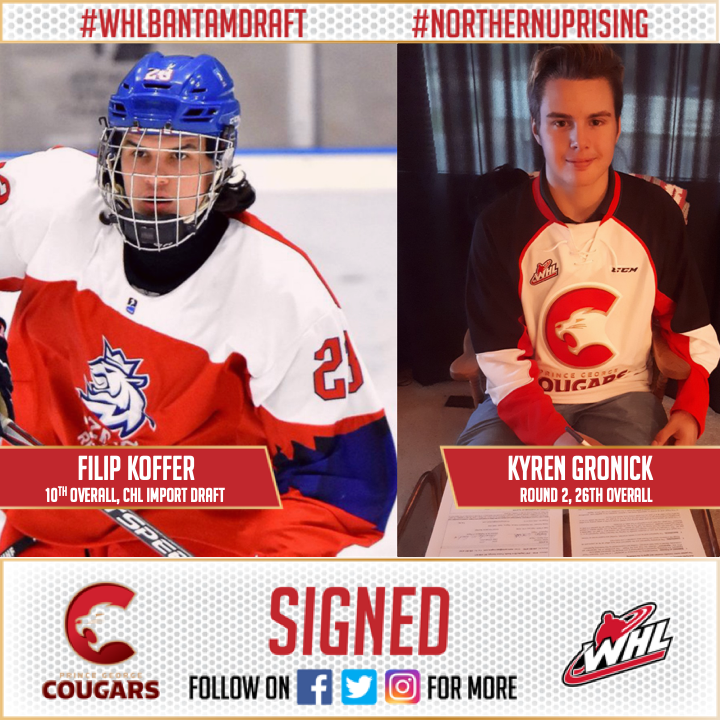 Gronick was the Cougars second-round selection, 26thoverall, in the 2019 WHL Bantam Draft in May. The Regina, Saskatchewan product played for the Regina Aces in the Saskatchewan Bantam AA Hockey League (SBAAHL) last season. Gronick led his team in scoring with 27 goals and 26 assists for 53 points in 24 games. His 27 goals were tied for seventh-best in the SBAAHL. The 5’10”, 150 lbs. power-forward was the Captain for the Aces this past season.

“We’re thrilled to have both Kyren and Filip committed to the Cougars. It’s another significant step forward for our organization,” stated Cougars’ General Manager & Head Coach Mark Lamb. “We expect Filip to have an immediate impact on our roster this season, and Kyren is another key piece to our young core of prospects who will be critically important to our future.”

Koffer was the Cougars’ first-round pick, 10thoverall, in the 2019 Canadian Hockey League Import Draft last month. A native of Hradec Kralove, Czech Republic, Koffer spent the majority of last season with HC Dynamo Pardubice in the Czech Under-19 league. In 38 games he compiled 10 goals and 28 assists for 38 points finishing fifth in team scoring. He played in another 12 games with the men’s team, in the Czech Extraliga, where he recorded one assist.

He was the Czech Republic’s top scorer at the 2019 World Hockey Championship in April, with four goals and two assists for six points in five games. He was named one of their top three players of the tournament. He also played for the Czechs at the 2018 Hlinka-Gretzky Cup and won a bronze medal at the 2017 World Under-17 Hockey Challenge.