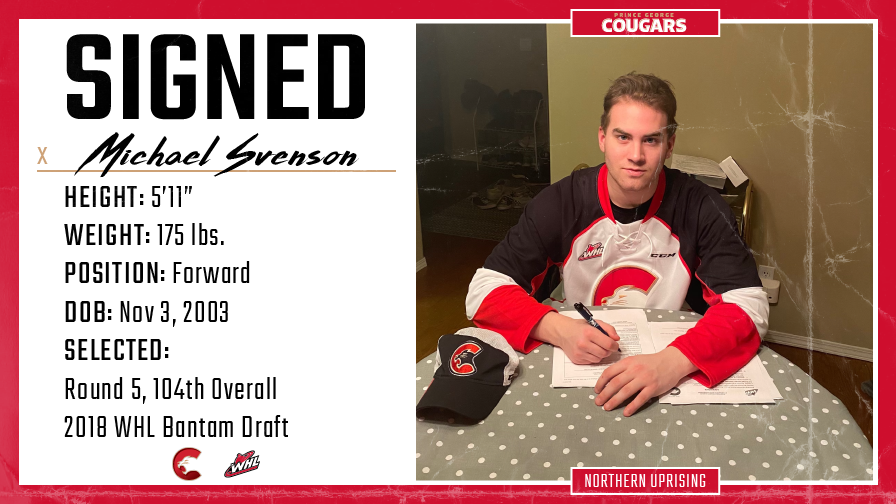 Svenson was drafted by the Cougars in the fifth round, 104th overall, in the 2018 WHL Draft. The 5’11”, 175-pound forward is the sixth player from the Cougars’ 2018 WHL Draft class to have signed a WHL Standard Player Agreement.

“Svenson is a young, physical and determined player and he will help make our team harder to play against. He also has the ability to provide us depth scoring and he’s a welcome addition to our young core of players,” said Cougars’ Director of Scouting, Bob Simmonds.

The 17-year-old started the 2020-21 season with the Winkler Flyers in the Manitoba Junior Hockey League (MJHL). In the truncated MJHL regular season with the Flyers, Svenson was third in team scoring after he posted six points (4g, 2a) in eight games. The Ile des Chênes, MB product played last season with the Eastman Selects in the Manitoba AAA Under-18 Hockey League and led his team in scoring after he compiled 54 points (29g, 25a) in 47 regular season games. He chipped in with another four points (3g, 1 a) in six playoff games. In two seasons at the Under-18 level, Svenson amassed 80 points (41g, 39a) in 94 regular season games.

The 2020-21 WHL B.C. Division season is slated to begin on Friday, March 26th in two Hub Centers located in Kamloops and Kelowna. The five-team B.C. Division will play a 24-game regular season schedule, which will be announced at a later date.