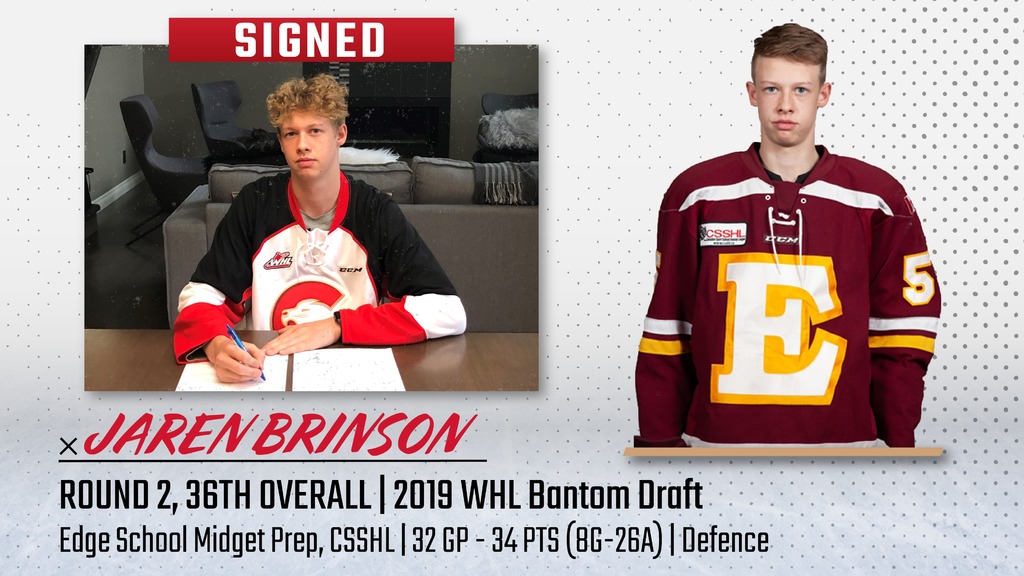 “Jaren’s commitment is another positive step forward for our organization,” said General Manager & Head Coach, Mark Lamb. “He made big strides in his development this past season and he’ll be a key piece in the future of this team.”

Brinson played for the Edge School Mountaineers at the Midget Prep level in the Canadian Sport School Hockey League (CSSHL) this past season. The Airdrie, AB product was the top scoring defenceman on his team and the second-highest scoring defenceman at the Midget Prep level, with 34 points (8G-26A) in 32 regular season games. In his WHL Bantam Draft year, Brinson had 11 points (3G-8A) in 28 regular season games. He also played for Team Alberta Blue at the 2019 Alberta Cup and won an Alberta Major Bantam Hockey League championship in 2018 with the Airdrie Xtreme Bantam AAA.

“Jaren is a young, smart defenceman who is very driven,” commented Director of Scouting, Bob Simmonds. “He fits perfectly into what we’re building, and his upside is significant.”

With Brinson’s signing, the Cougars have now signed each of their first four prospects in the 2019 and 2020 WHL Bantam Drafts.