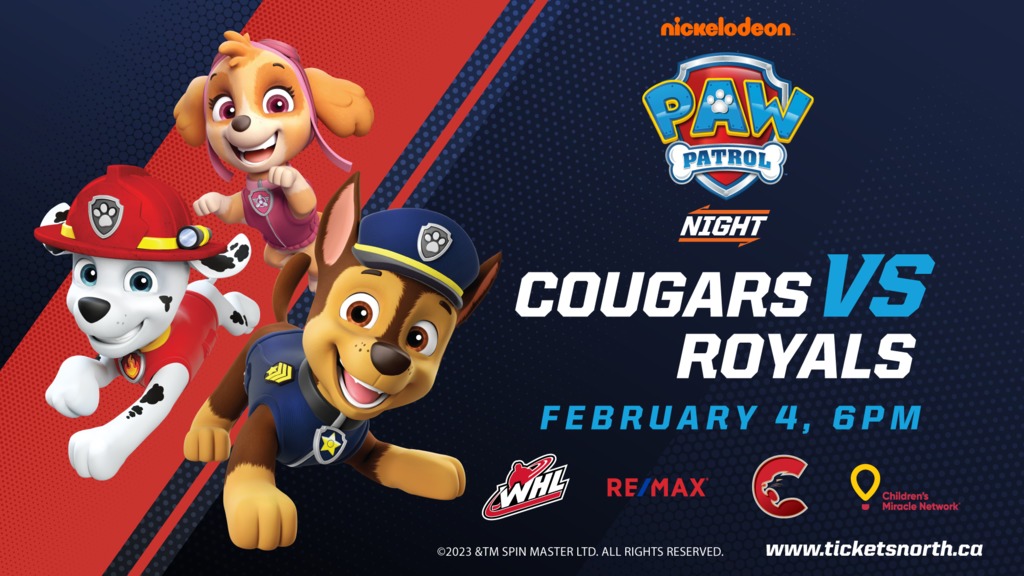 Related Links
Get Your Tickets for Nickelodeon Night!

The Cougars are thrilled to host a PAW Patrol night at the CN Centre on Saturday, February 4th when they host the Victoria Royals. The night will feature several fun initiatives for kids including:

“For over 30 years, RE/MAX has been an important partner of Children’s Miracle Network and I am always inspired by the new ways they find to support children’s healthcare and raise funds for local children’s hospital Foundations across Canada,” said Mark Hierlihy, President, and CEO of Canada Children’s Hospital Foundations. “The RE/MAX presents: Nickelodeon Night for Children’s Miracle Network, done in partnership with the Western Hockey League, promises to be a fun and interactive event, and one that is going to raise critically needed funds to support children’s hospitals in Western Canada. I’d like to say thanks to all involved for putting this night together, and I hope it’s the first of many.”

The Children’s Miracle Network strives to fund critical treatments and healthcare services, pediatric medical equipment, and research. Its various fundraising partners and programs support the mission to save and improve the lives of as many children as possible.

About the RE/MAX Network

As one of the leading global real estate franchisors, RE/MAX, LLC is a subsidiary of RE/MAX Holdings (NYSE: RMAX) with more than 140,000 agents in over 8,600 offices across more than 110 countries and territories. Nobody in the world sells more real estate than RE/MAX, as measured by residential transaction sides. RE/MAX was founded in 1973 by Dave and Gail Liniger, with an innovative, entrepreneurial culture affording its agents and franchisees the flexibility to operate their businesses with great independence. RE/MAX agents have lived, worked and served in their local communities for decades, raising millions of dollars every year for Children’s Miracle Network Hospitals® and other charities. To learn more about RE/MAX, to search home listings or find an agent in your community, please visit remax.ca. For the latest news from RE/MAX Canada, please visit blog.remax.ca. Each RE/MAX office is independently owned and operated.

Nickelodeon, now in its 43rd year, is the number-one entertainment brand for kids. It has built a diverse, global business by putting kids first in everything it does. The brand includes television programming and production in the United States and around the world, plus consumer products, digital, location-based experiences, publishing and feature films.

Canada’s Children’s Hospital Foundations (CCHF), established in 2017, is a not-for-profit organization that raises funds for a national network of hospital foundations as the largest single, non-government funder of child health in Canada. CCHF continues to receive generous support through donors within Children’s Miracle Network® as well as contributions from additional companies and donors. Together, we represent 13 of Canada’s children’s hospitals where the greatest challenges are tackled; our hospitals see the most critical cases. Your contribution helps your local children’s hospital ensure that all sick and injured children have access to the very best care from coast to coast. For more information on this partnership, click here.

Cougars Fall to Raiders to Start Home-Stand
10 hours ago