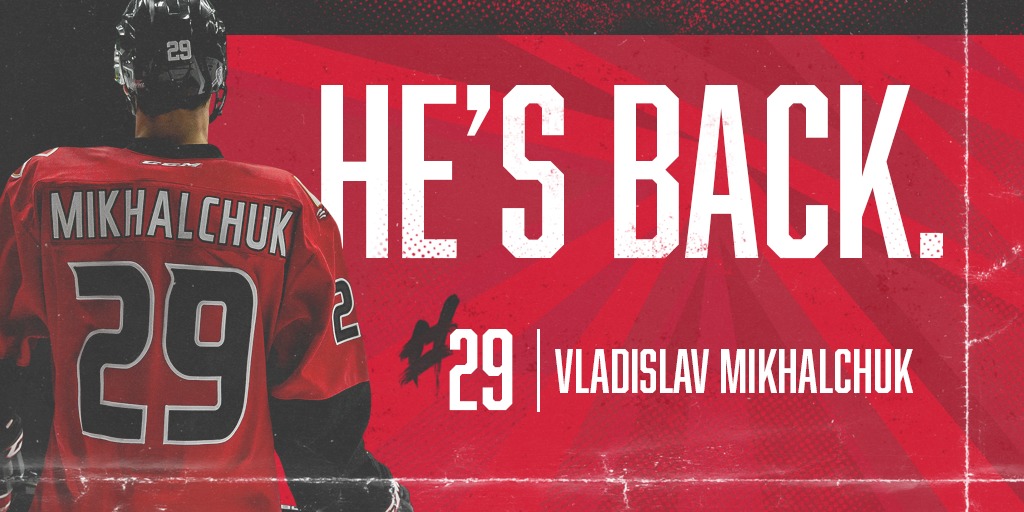 The Prince George Cougars Hockey Club is welcoming back their top scorer from a season ago. The Cougars have added import forward Vladislav Mikhalchuk (’99) to the roster, the team announced Wednesday.

In a corresponding move, the team has traded import forward Matéj Toman (’01) to the Saskatoon Blades, in exchange for a sixth-round Western Hockey League Bantam Draft selection in 2021.

This will be Mikhalchuk’s third season with the Cougars and he led the team in scoring last season with 25 goals and 25 assists for 50 points in 68 games. In his two seasons in the WHL, Mikhalchuk has amassed 39 goals and 44 assists for 83 points in 128 career regular season games. He was drafted by the Cougars in the first-round, 54th overall, in the 2017 Canadian Hockey League (CHL) Import Draft.

Toman was in his second season with the Cougars and was seventh in team scoring with six points (3g, 3a) in 16 games. Last season, the Czech Republic product had 20 points (9g, 11a) in 66 regular season games. Toman was drafted by the Cougars in the first-round, fifth overall, in the 2018 CHL Import Draft.

Mikhalchuk is expected to arrive in Prince George tomorrow and could make his season debut Friday, when the Cougars face the Victoria Royals at the CN Centre.