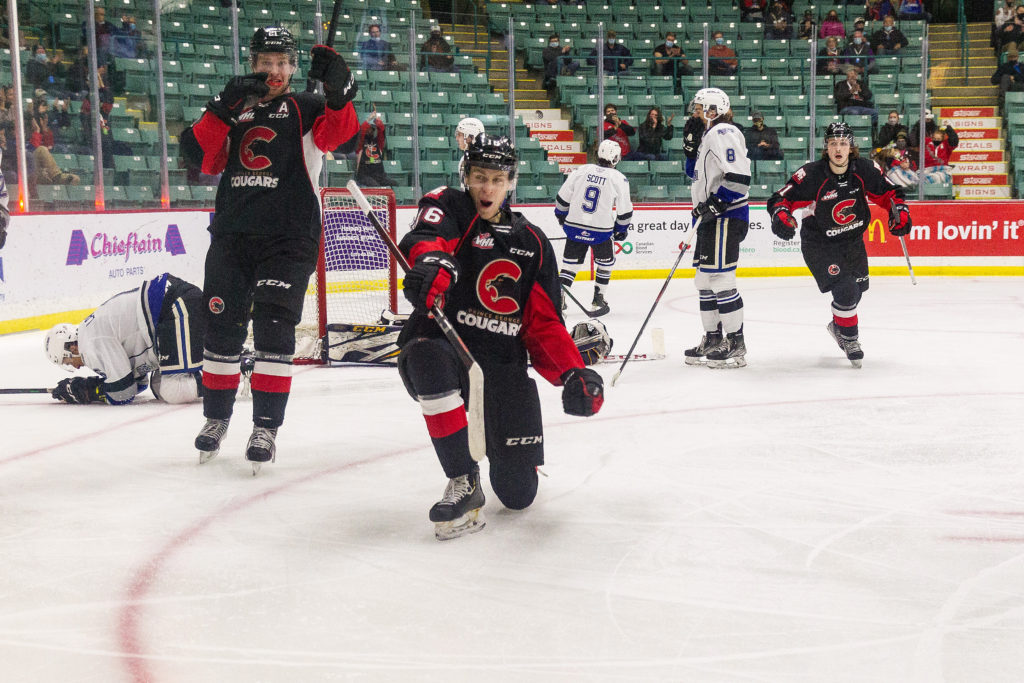 The Prince George Cougars extended their win streak to a season-best five games on Wednesday, blanking the Victoria Royals 4-0 at the CN Centre.

Blake Eastman and Carter MacAdams each scored a pair of goals in the victory and Tyler Brennan stopped all 31 shots he faced for his first shutout of the season. Viliam Kmec had a pair of assists.

This is the first time since January 18th, 2017, the Cougars have won five-straight. Prince George is now two points back of the idle Kamloops Blazers for first place in the B.C. Division.

MacAdams opened the scoring late in the first period. The 17-year-old scored his first of two at 14:09 after he banged in a rebound the came off the pad of Royals’ goaltender Tyler Palmer.

Eastman scored his first of the night midway through the middle frame to double the Cougars’ lead. It was a case of follow the bouncing puck, as he scored after a scramble in front of the Victoria net. Ryker Singer was stopped not once but twice, including hitting the crossbar, but Eastman eventually scored into a gaping net at 11:10. Eastman picked up in the third where he left off in the second.

The power forward put Prince George up 3-0 nearly six-minutes into the third. On the power-play, Eastman redirected Ethan Samson’s blast from the blue-line whilst camped out at the top of the Royals’ crease.

MacAdams put the finishing touches on the scoring 74-seconds later, as he buried his second of game at 7:13 to make it 4-0. Connor Bowie walked out of the corner and tried to jam the puck on in but MacAdams was there to followed up and shovelled in the rebound from inside the blue paint.

Brennan was at his best in the final minutes of regulation when the Royals were on an extended five-on-three. The 18-year-old stopped all 13 shots he faced in the third, en route to his second career shutout.

GAME NOTES: After Wednesday’s win, Brennan is now 3-0-0-0 against the Royals, with a 1.00 goals-against average and .964 save percentage. With two more assists tonight, six of Viliam Kmec’s eight points have come against the Royals. During the Cougars’ five-game win streak, they have conceded just five goals against.

NEXT GAME: The Cougars welcome the Kamloops Blazers to the CN Centre on Saturday, October 30th. Join us for “Cougars Halloween,” as there is trick-or-treating on the concourse, along with a many more Halloween activities. Tickets start at just $16 and are available at the TicketsNorth box office, by phone (1-888-293-6613), or online at www.ticketsnorth.ca