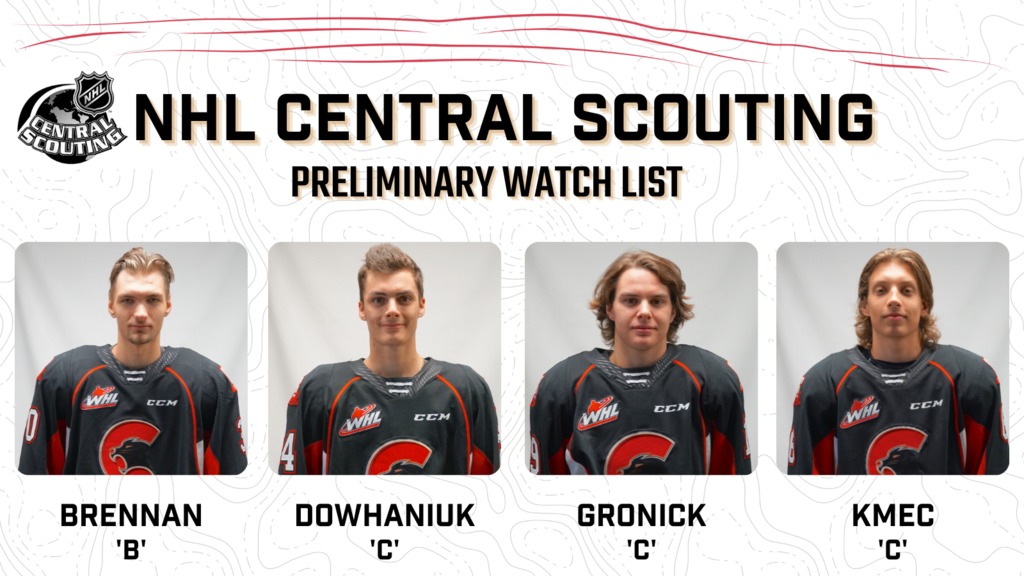 The Prince George Cougars are proud to announce four players have been named to NHL Central Scouting’s ‘Preliminary Players to Watch’ List ahead of the 2022 NHL Draft.

Goaltender Tyler Brennan was ranked a ‘B’ prospect, while defencemen Keaton Dowhaniuk, Viliam Kmec, and forward Kyren Gronick were listed as ‘C’ prospects.

Dowhaniuk, 17, has four penalty-minutes and eight shots on goal through five games. The defenceman has logged important minutes on the Cougars’ blueline this season. As a 16-year-old, Dowhaniuk had eight points (3g-5a) in 22 games during the 2020-21 B.C. Division Hub season. The Sherwood Park, AB product tied for the team lead in short-handed goals a season go.

Kmec, 17, has had an impressive start to his rookie campaign. The native of Košice, Slovakia has four points (0g-4a) in his first five games. Kmec was drafted by the Cougars in the second-round, 104th overall, in the 2021 Canadian Hockey League Import Draft. The blueliner won a silver medal with Slovakia at the 2021 Hlinka Gretzky Cup in August. Last season, Kmec had four points (0g-4a) in 27 games for Slovakia’s Under-18 squad, which played in the Slovak Second League.

Gronick has had a great start to the 2021-22 season, as the 17-year-old is third in team scoring with six points (2g-4a) in five games. The Regina, SK product has recorded a point in four of the Cougars’ first five games. His four assists are tied for second on the team’s roster. As a 16-year-old rookie last season, Gronick tallied 11 points (5g-6a) in 17 games.