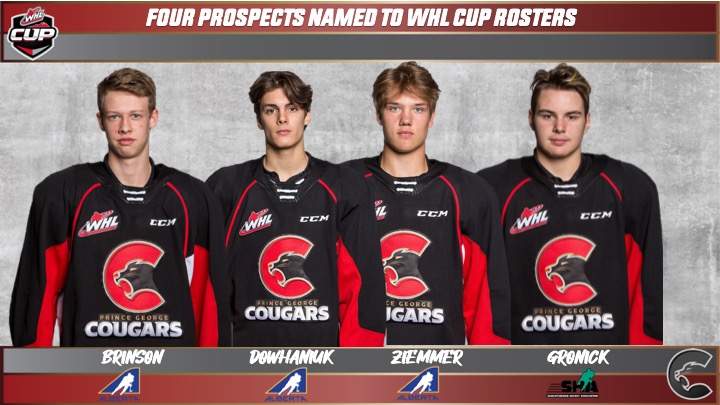 The Prince George Cougars are proud to announce four prospects will play at the Western Hockey League (WHL) Cup this year. The WHL Cup takes place from October 23rd-27th in Calgary, AB.

The Cougars’ first four selections from the 2019 WHL Bantam Draft will suit up for their provinces later this month.

Signed second-round pick Kyren Gronick is on Team Saskatchewan’s roster. The Regina product was taken 26th overall by the Cougars in the 2019 WHL Bantam Draft. Gronick is playing with the Regina Pat Canadians in the Saskatchewan Midget AAA Hockey League.

The WHL Cup features the highest-rated players in the under-16 age category from the provinces of Alberta, British Columbia, Manitoba and Saskatchewan. The tournament will be a four-team round-robin format and is the first step in Hockey Canada’s Program of Excellence for players. Team B.C. is the defending champions, winning in 2017. The event wasn’t contested in 2018 due to the Canada Winter Games.