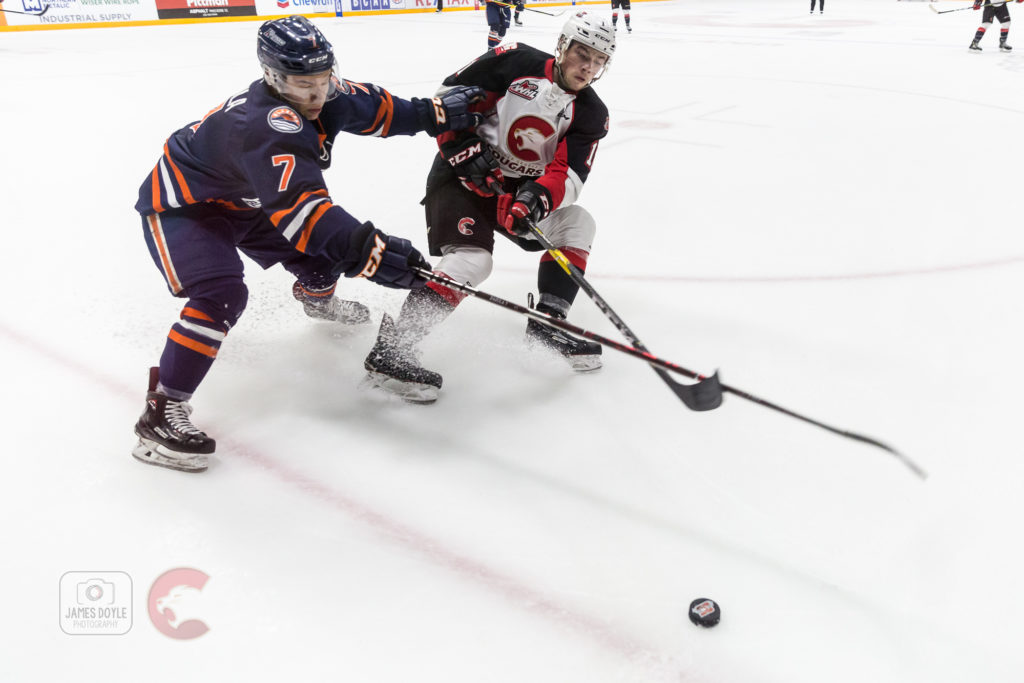 10 days after concluding Training Camp with their annual Black versus White game, the Cougars are set to face someone other than themselves and a divisional rival no less. The Blazers have a leg up, in terms of game experience, as they’ve already played two pre-season games, winning both against the Victoria Royals (9-1) and the Kelowna Rockets (5-3).

This afternoon is the start of three games in three days for the Cougars, as they face the Vancouver Giants tomorrow night and then make a trip to the Okanagan against the Rockets on Sunday afternoon. After today, the Blazers face the Royals tomorrow morning and the Giants Sunday afternoon; both at the LEC.

The Cougars are carrying 30 players on their pre-season roster but only are travelling with 24 on this trip. Taylor Gauthier (Boston), Josh Maser (New York Rangers) and Cole Moberg (Chicago) will miss the weekend as they’re at NHL Prospect Tournaments. Gauthier is in Buffalo, New York this weekend with the Bruins who are participating in the 2019 Prospects Challenge hosted by the Sabres. Maser and Moberg are both in Traverse City, Michigan for the Traverse City Tournament. The Cougars are also without forward Ethan Browne and defencemen Cole Beamin and Rhett Rhinehart who are out due to injury. The Cougars are carrying one extra goalie on this trip, as Cariboo Cougars’ goaltender Colton Phillips-Watts is with the team as an emergency back up in case of injury.

There will be a lot of young faces in the line-up, including 2019 WHL Bantam Draft first-round picks Keaton Dowhaniuk and Koehn Ziemmer. The two OHA Edmonton teammates were selected third and fourth overall by the Cougars in May. 2018 draft picks Blake Eastman and Ethan Samson is also poised to make his Cougars debut. An official line up will be posted online later this afternoon.

If you missed it yesterday, the Cougars announced the signing of 17-year-old defenceman Aiden Reeves. The Prince George product was signed after an impressive showing at the Cougars’ Training Camp. More on his signing HERE.