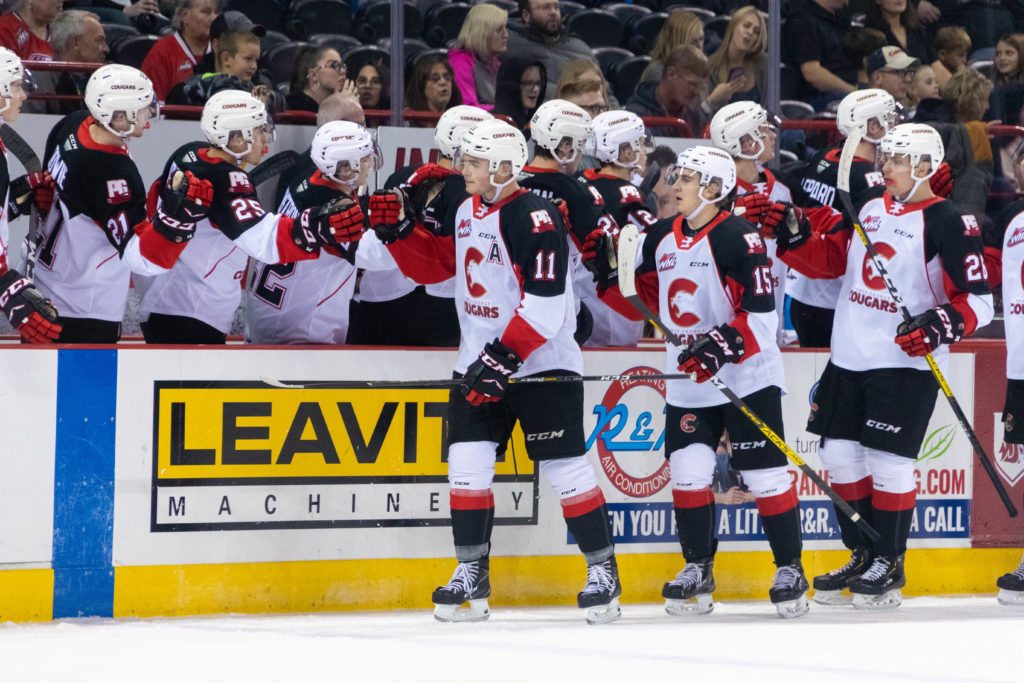 You can watch tonight’s game, and every road game, at Brown’s Socialhouse in Prince George.

The Prince George Cougars (2-4-0-1) conclude their two-game U.S. Division road trip tonight in Kennewick, WA against the Tri-City Americans (4-3-0-0). The Cougars are coming of their first road win of the season, beating the Spokane Chiefs 3-1 a night ago. Prince George has won back-to-back games. The Americans picked up their first home win of the season a night ago, edging the Victoria Royals 4-3 in overtime. Tonight, is the first of four meetings between the two clubs.

Last night the Cougars rode the strong goaltending of Taylor Gauthier. The 18-year-old stopped 44 of 45 shots and was named the game’s first star. Friday was Gauthier’s first win this season. He saved his best for last, as he stopped all 18 shots he faced in the third period. The Chiefs outshot the Cougars 18-2 in the final frame. Prince George used their depth to their advantage last night, as they got goals from Josh Maser, Connor Bowie and Mitch Kohner. Bowie and Kohner played on a line with Craig Armstrong and the there combined for three points. Maser has now scored in three-straight games.

Tonight, is the first of four match ups between the two non-divisional opponents. The Cougars return to Kennewick in two weeks, when they face the Americans two weeks from today on October 26th. Prince George has faired well at the Toyota Center is recent years,  splitting their last four games in Kennewick, most recently winning 1-0 on January 8th, of last season.

The Cougars are looking to win three in a row, something they’ve not done in nearly a full calendar year. The Cougars last three-game win streak was October 13th-21st, 2018, when they beat the Lethbridge Hurricanes, the then Kootenay ICE, and Swift Current Broncos. Fast-forward to nearly a year later and they’re looking to match that feat.

Kelly Buchberger has his team off to a sound start, as the Americans have won four of their first seven games. They’ve been a bit of a Jekyll and Hyde group out of the gate. In their four wins, the Ams have surrendered only six goals but in their three losses they’ve been outscored 19-3. Last night they scored their first win at home, knocking off the Victoria Royals 4-3 in overtime. The game prior? It was a 7-1 drubbing at the hands of the Spokane Chiefs and in their home opener no less. Beck Warm has been their backbone and workhorse in net. The 20-year-old has stared every game thus far for the Americans and is coming off a season where he played the second-most minutes (3,614) out of any goaltender in the WHL and made the most saves (1,925). The 1,925 saves was a franchise single-season record. It looks like he is comfortable with the workload and capable, as he won the team’s fitness award at Training Camp.

Colorado Avalanche draft pick Sasha Mutala is off to a great start. The 18-year-old leads the Americans with 10 points (3-7-10) in seven games. A nice surprise has been Samuel Huo. The former Seattle Thunder, acquired by General Manager Bob Tory from Seattle in January of last season for a fifth-round pick, is second in team scoring with six points (4-2-6) in seven games. That fifth-round conditional draft pick is for the 2020 WHL Bantam Draft. A move that looks to be a steal for the Americans.

The Americans also got a big boost recently with two 20-year-olds being returned from the professional ranks. Kyle Olson was returned by the Anaheim Ducks just a little over a week ago, and Krystof Hrabik recently signed an American Hockey League contract with the San Jose Barracuda, the San Jose Shark’s farm club. Both made an impact last night, as it was Olson scoring the game-winner in OT, set up by Hrabik. The pair will be big pieces going forward.

Josh Maser comes into tonight’s game riding a three-game goal scoring streak. His next point will be 100 for his WHL career. Reid Perepeluk has found some great chemistry playing on the wing with Maser. Perepeluk has four assists in his last four games. Over his last four starts, Taylor Gauthier has a .948 save percentage.