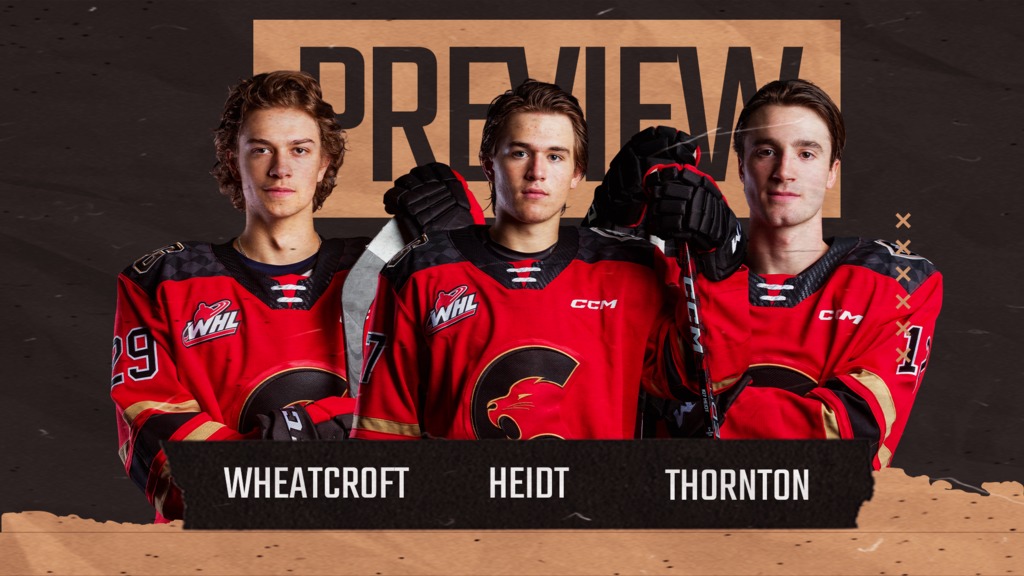 Related Links
Get Your Tickets Today!

PRINCE GEORGE BC – The Prince George Cougars are back at home and opening a stretch of three games in 10 days, beginning with a head-to-head matchup against the Moose Jaw Warriors

Cougars’ Last Game: A 5-2 win over Victoria on Saturday, November 19

Lending a Helping Hand: Riley Heidt has recorded 13 assists over his last seven games for the Cougars. The 17-year-old from Saskatoon, SK is now 6th in league scoring with 34 points in 21 games.

The Streaks Continue: The point streaks continue for both Koehn Ziemmer and Hudson Thornton. Both Cougar skaters enter tonight’s game against Moose Jaw with points in 13 straight games. Ziemmer and Thornton have combined for 16 goals and 31 assists in that span.

Dubinsky Delivering: In five games as a Cougar, Cole Dubinsky has been producing at a rapid pace. The 2002-born forward has scored six times and has collected three assists. Dubinsky led the way for the Cougars on Saturday against Victoria scoring twice.

Power-Play Production: The Cougars’ man advantage has been terrific in the 2022-23 season. The man advantage for Prince George has connected in eight-straight games heading into tonight against Moose Jaw. Prince George leads the WHL in power-play goals thus far with 29.

On the Other Side: Moose Jaw comes to town to start a seven-game road trip that ranges from November 23rd-December 4th. The Warriors have had an excellent start to the 2022-23 campaign, sporting a 13-8-0-0 record and sitting 4th in the Eastern Conference. Offensively, Brayden Yager leads the way with 29 points in 18 games.

What Are We Wearing? The Cougars are slated to wear their red uniforms tonight.

The team will shift their attention to the Kamloops Blazers as they make their way to Prince George for a Saturday night clash at 6:00 PM. The Cougars will then wrap up the home stand on Friday, December 2ndagainst the Regina Pats at 7:00 PM.