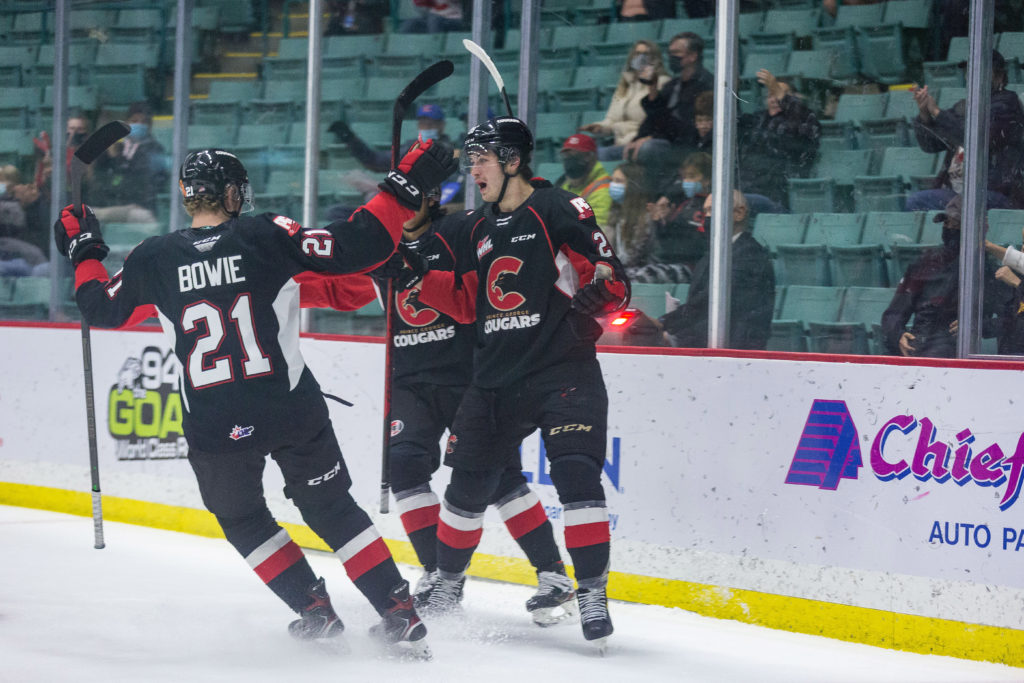 The Prince George Cougars swept their weekend doubleheader against the Victoria Royals with a 4-2 win Sunday afternoon at the CN Centre.

Craig Armstrong scored the game-winner early in the third period to break a 2-2 tie, and then he sealed the two points with an empty-net goal inside the final minute. Armstrong finished with three points (2g-1a) on the afternoon. Blake Eastman and Mitch Kohner also scored in the win.

Tyler Brennan was sharp in net, as the 18-year-old turned aside 31 of 33 shots for his first win of the season. Brennan and Saturday’s winner, Taylor Gauthier, combined to stop 53 of 56 shots over the two games on the weekend.

Just like Saturday, special teams dominated the storyline Sunday as the Cougars were shorthanded 10 times. The penalty-kill was stellar, as Prince George only surrendered one power-play goal. The Cougars only had three power-plays themselves.

Eastman opened the scoring late in the first period as he scored his first of the season at 14:57. The Cougars carried a 1-0 lead into the middle frame, before the Royals countered with two goals inside the first six-minutes of the period.Riley Gannon tied the game with a power-play goal just 38-seconds into the second, then Tanner Scott put the Royals ahead 2-1 at 5:42. It stayed that way until Kohner gave his team a shot in the arm.

Kohner tied the game midway through the second frame with a hometown bounce. Kohner made it 2-2 at the 13-minute mark after his pass from behind the net banked in off the Royals’ goaltender. Kohner was in on the game-winner in the third period too.

The 19-year-old won a footrace to the puck on the right-wing and found a streaking Armstrong in the slot, who buried stick side for his second of the game, which put the Cougars back ahead 3-2 at 5:45. Armstrong put the game out of reach with an empty-net goal at 19:40.