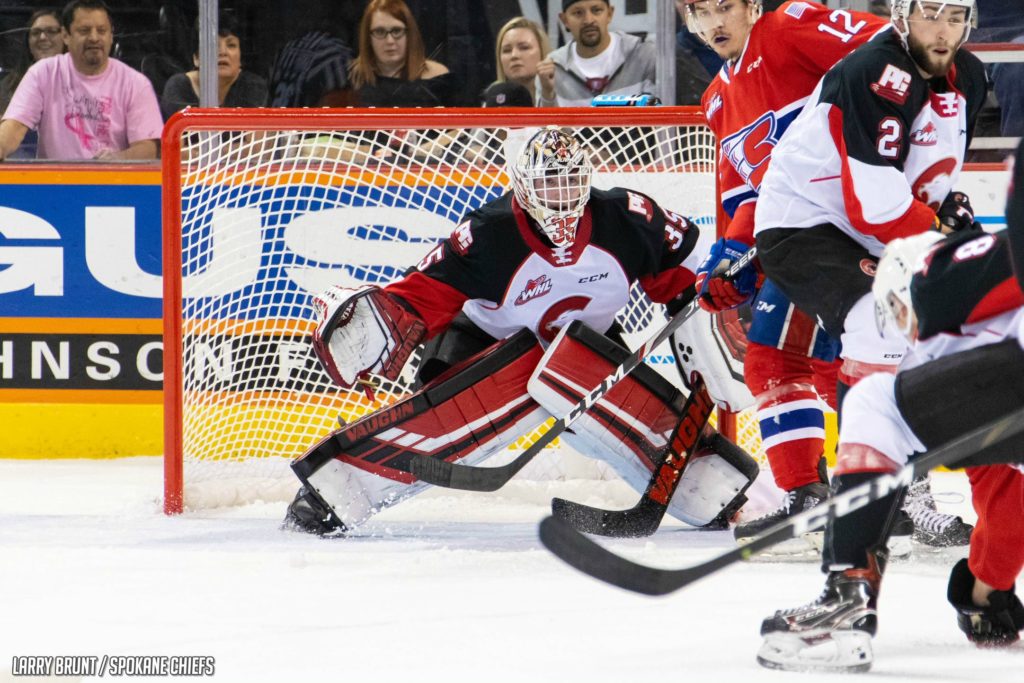 The wait is over. The Prince George Cougars snapped a two-season long losing streak to the Spokane Chiefs on Friday, with a 3-1 win at Spokane Veterans Memorial Arena.

Taylor Gauthier backstopped the Cougars (2-4-0-1) to their second consecutive win, as he turned aside 44 shots, including all 18 he faced in the third period, for his first win of the season. Not surprisingly, Gauthier was named the game’s first star as well. The Cougars swept the three stars, as Josh Maser was the game’s second star and Connor Bowie was third star.

Josh Maser, Connor Bowie and Mitchell Kohner supplied the offence. Maser’s goal was his third in as many games and Bowie’s was his first of the season and was the game-winner. Kohner’s second goal of the season was an insurance marker late in the middle frame.

Bobby Russell scored the Chiefs’ only goal, early in the second period but Bowie replied for the Cougars not even three-minutes later to restore Prince George’s lead, and they never looked back.

Campbell Arnold was tagged with the loss in the Spokane crease stopping 21 of 24 shots.

Friday’s win was the Cougars’ first against the Chiefs since March 11th, 2017. They had previously lost their last four trips to Spokane.

Reid Perepeluk’s assist on Maser’s goal gives him four assists in his last four games. Bowie’s game-winner was his first goal since March 9th of last season. Blake Eastman recorded his first career WHL point on the Cougars’ second goal, as he was credited with an assist.

The Cougars conclude their two-game U.S. Division road swing tomorrow night in Kennewick, WA against the Tri-City Americans; puck drop is slated for 7:05 pm. Fans can watch the game at Brown’s Social House in Prince George, or they can listen on 94-3 The GOAT.