Mikhalchuk the OT Hero, in Cougars 5-4 Win over Kamloops 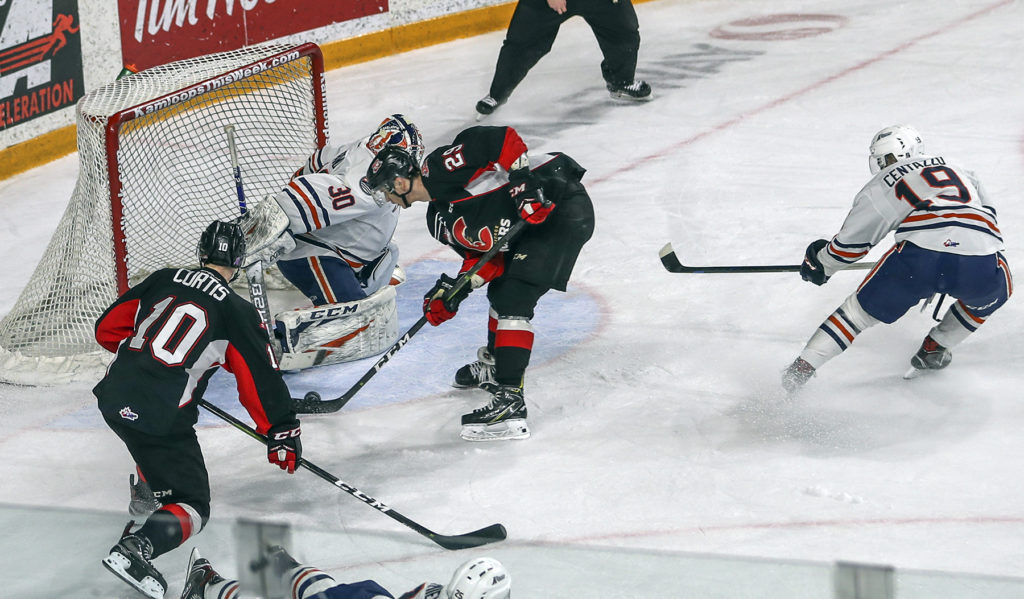 The Prince George Cougars like the role of spoiler. Vladislav Mikhalchuk scored 3:46 into overtime, as the Cougars edged the Kamloops Blazers 5-4 on Friday night. The win is the Cougars second in a row, as they go back home for a rematch with the Blazers on Saturday in their season finale.

Mikhalchuk had a game-high four points, scoring a pair of goals in the come from behind win. He was named the game’s third star and the WHL’s first star of the night. Josh Curtis had a goal and two assists and Mike MacLean, and Rhett Rhinehart also found the back of the net. Taylor Gauthier stopped 26 of 30 shots to pick up his 15thwin.

It was a roller coaster on Friday, as the two teams combined for three lead changes and a five-goal third period. The Cougars opened the scoring and finished it.

Rhinehart got the Cougars’ on the scoresheet first, scoring his fifth of the season at 4:13 of the first. Mikhalchuk setting him up on the doorstep. The Blazers tied it late in the opening frame on a Kobe Mohr goal at 15:02.

Kamloops then grabbed their first lead, early in the second period, as Ryley Appelt was last to touch the puck in front of the Cougars’ net at 4:59. The Blazers took a 2-1 lead into the third period, just before the Cougars poured in on.

Mikhalchuk picked up his first of the game just over a minute into the third, parking out front and scoring over an outstretched Dylan Garand to tie it up 2-2. Then, Josh Curtis gave his team their second lead, making it 3-2 just before the seven-minute mark. Curtis was stopped at the side of the trying to redirect Mikhalchuk’s shot but quickly recovered, banking the puck in off the goalie’s back from behind the goal. The Cougars kept coming.

Mike MacLean made it 4-2 three-minutes later. Jumping out of the penalty-box, picking off an errant pass and scoring over the goalie’s glove on a breakaway. However, the Blazers didn’t quit.

Kyrell Sopotyk scored on the power-play with six and a half minutes left to cut the Cougars’ lead to 4-3. Then, with goalie pulled, it was Connor Zary banging in a rebound at the side of net with 55-seconds left, tying the game at 4-4 and sending the home crowd into a frenzy.

The Cougars made the most of their only shot in overtime, as they scored on a three-on-one rush. Curtis carried down the wing before sliding a backhand pass to the middle, where Mikhalchuk quickly went to his backhand beating the Blazers’ goalie on the stick-side.

Friday’s win was just the second win for the Cougars after trailing going into the third period. Before, they had won just once in their previous 35 games when down after 40-minutes. Curtis and Mikhalchuk combined for seven points and six of those seven came in the third period.

The overtime win was the Cougars’ second-straight over the Blazers, as they won 2-1 in a shootout back on February 22nd.