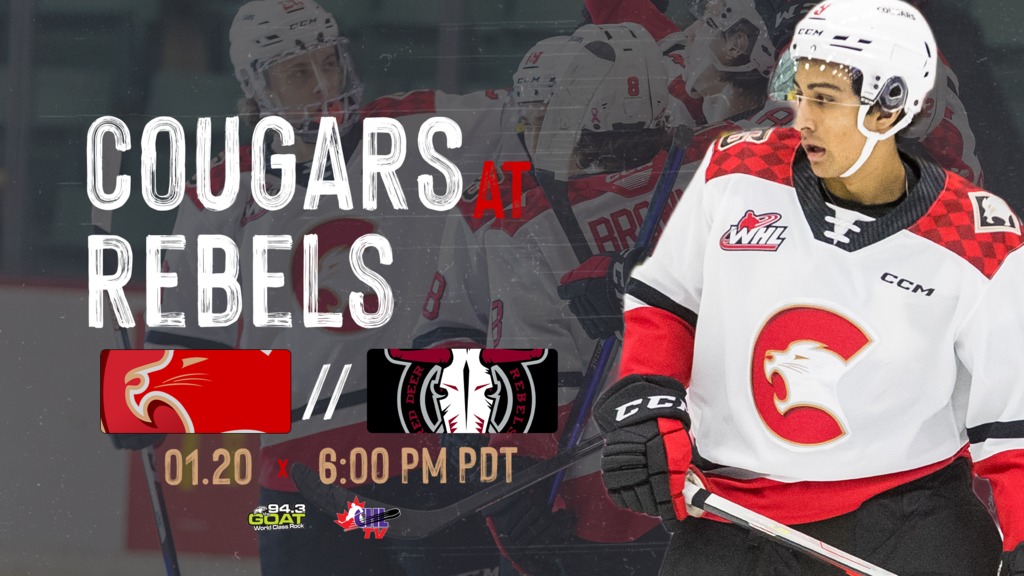 Cougars Last Game: A 6-5 win on Wednesday night in Calgary against the Hitmen

Rebels Last Game: A 2-1 win over the Lethbridge Hurricanes on Saturday

Last Time Out: The Cougars got back in the win column on Wednesday with a 6-5 win over the Calgary Hitmen. The win was highlighted by Jaxsen Wiebe and Koehn Ziemmer who had three points each, including Wiebe with the game winning goal. Zac Funk collected his first goal as a Cougar against his former team. Tyler Brennan earned the win in goal, making 30 saves on 35 Calgary shots.

Bawa is Back: Newly acquired Cougar and former member of the Rebels Arjun Bawa will play against his old team tonight. Bawa was acquired by the Cougars from Red Deer prior to the January 10th deadline in exchange for Ryker Singer.

On the Other Side: The Red Deer Rebels have been rolling this season. The Rebels sit with the second-best record in the WHL at 29-8-1-3. Offensively, Red Deer is led by Kai Uchacz who has 53 points in 41 games and is second in the WHL in goals with 34. Cougar fans will be familiar with a pair of names on the Rebels roster. Craig Armstrong was acquired by the Rebels in this past off-season and has collected 22 points in 41 gamea this season. Armstrong spent a part of four seasons with the Cougars before being moved in the off-season. Ryker Singer was acquired by Red Deer in exchange for Arjun Bawa prior to the deadline. Singer will get to play against his old club tonight.

AFTER THE FINAL HORN

The Cougars will wrap up the 7-game trip tomorrow night when they visit the defending WHL champion Edmonton Oil Kings at 6:00 PM at Rogers Place.