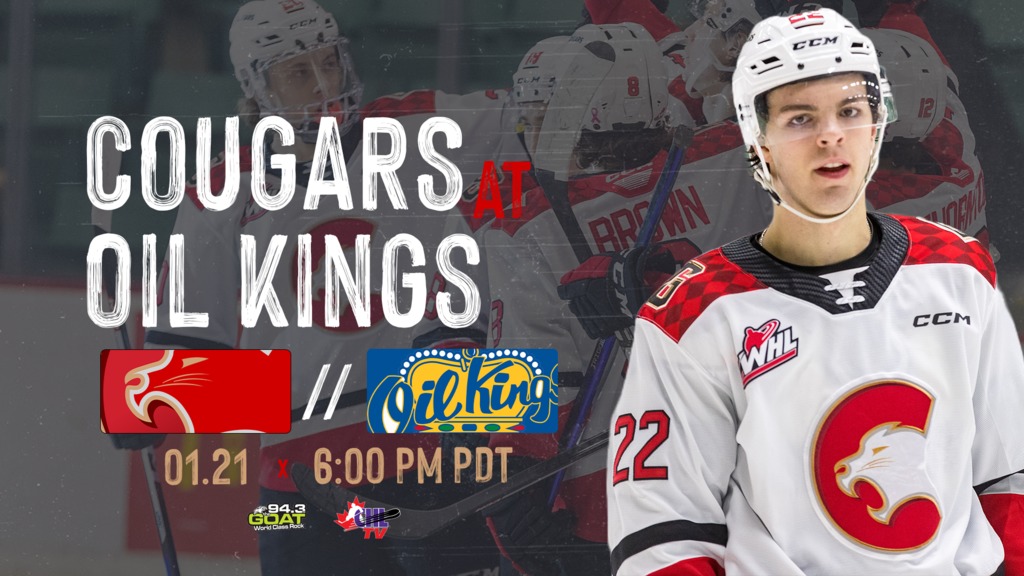 EDMONTON AB – The Cougars wrap up their seven-game road trip tonight in Edmonton against the Oil Kings at Rogers Place.

Last Time Out: The Cougars got into a lot of penalty trouble last night, resulting in five Red Deer power-play goals, and ended up dropping an 8-5 contest to the Rebels. Viliam Kmec, Ondrej Becher, Jaxsen Wiebe, and Koehn Ziemmer (2) had the Cougar goals while Ty Young made 34 saves in the loss.

The Champ is Back: Forward Jaxsen Wiebe makes his return against his former team tonight. Wiebe was a part of the championship Oil Kings team last season. The 20 year old from Moose Jaw’s time as an Oil King was highlighted by his hat-trick in the Memorial cup which included the overtime winner. Wiebe was acquired by the Cougars earlier this season in exchange for Noah Boyko and a draft pick.

On the Other Side: The Edmonton Oil Kings, coming off a banner season, have struggled this season. The WHL’s last place team has won just two of their last 10 games heading into tonight. Offensively, the Oil Kings are led by Gavin Hodnett who has collected 25 points in 36 games (7G-18A).

AFTER THE FINAL HORN

The Cougars will return home for their longest home-stand of the season to date, beginning a week from tonight against the Prince Albert Raiders at 6:00 PM at the CN Centre.