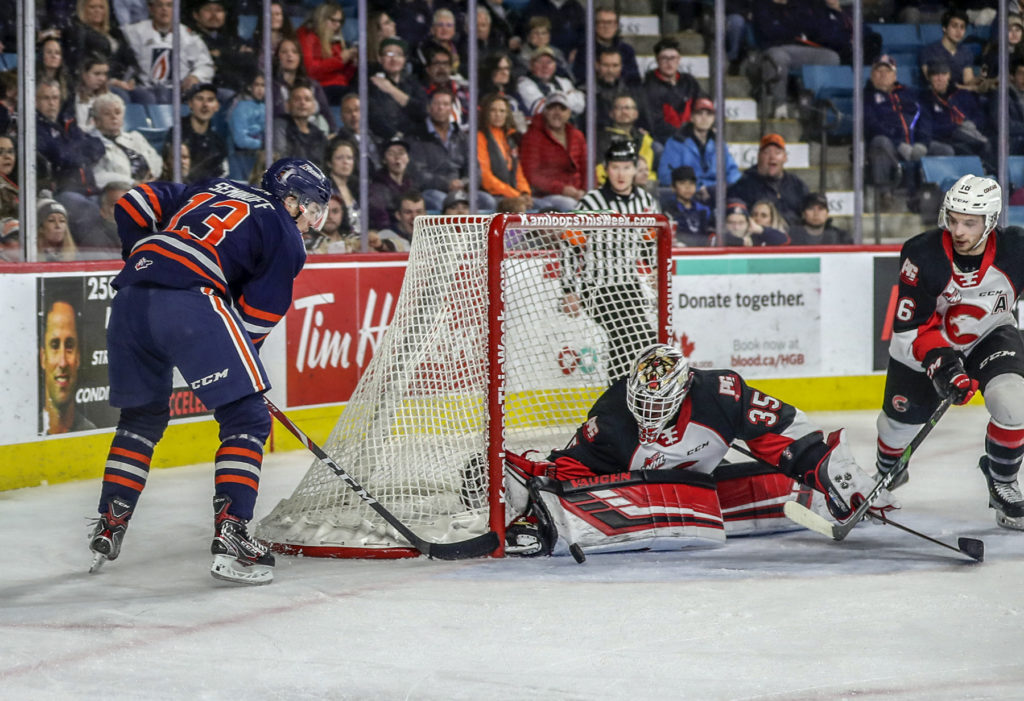 The Prince George Cougars went toe-to-toe with the B.C. Division’s top team and fell just short in a 1-0 setback to the Kamloops Blazers at the Sandman Centre Friday.

It was a scoreless deadlock through 40-minutes, before the Blazers’ Matthew Seminoff scored the game’s only goal 38-seconds into the third period. Seminoff’s game-winner was from near the goal-line on the right-wing, as he found space between the post and the goalie’s pad.

The Blazers’ Rayce Ramsay stopped 23 shots for his second shutout of the season and his first win over the Cougars. The Cougars’ Taylor Gauthier was much busier and was terrific in a losing effort, stopping 43 of 44 shots and was named the game’s second star.

The Cougars best chance to get on the scoresheet was in the first period when Ethan Browne was awarded a penalty-shot. With just over four-minutes left in the opening frame, Browne was hauled down by Sean Strange. On the ensuing penalty-shot, Browne made a move to his backhand but was stopped by Ramsay’s outstretched pad.

Game Notes: Vladislav Mikhalchuk made his season debut Friday. He had two shots on goal and was an even rating. The Cougars have been shut out twice this season and both of those shutouts have come over their last five games. Defencemen Joe Kennedy and Rhett Rhinehart did not play Friday; Prince George went with 12 forwards and five defencemen. The loss drops the Cougars record to 2-8-0-2 against the B.C. Division.

Next Up: The Cougars (4-14-0-2) finish their two-game B.C. Division road trip Saturday in Langley against the Vancouver Giants (10-8-1-1). Prince George beat Vancouver 3-2 in overtime in their last encounter on October 27th. Fans can watch the game at Brown’s Socialhouse in Prince George or listen on 94.3 The GOAT.