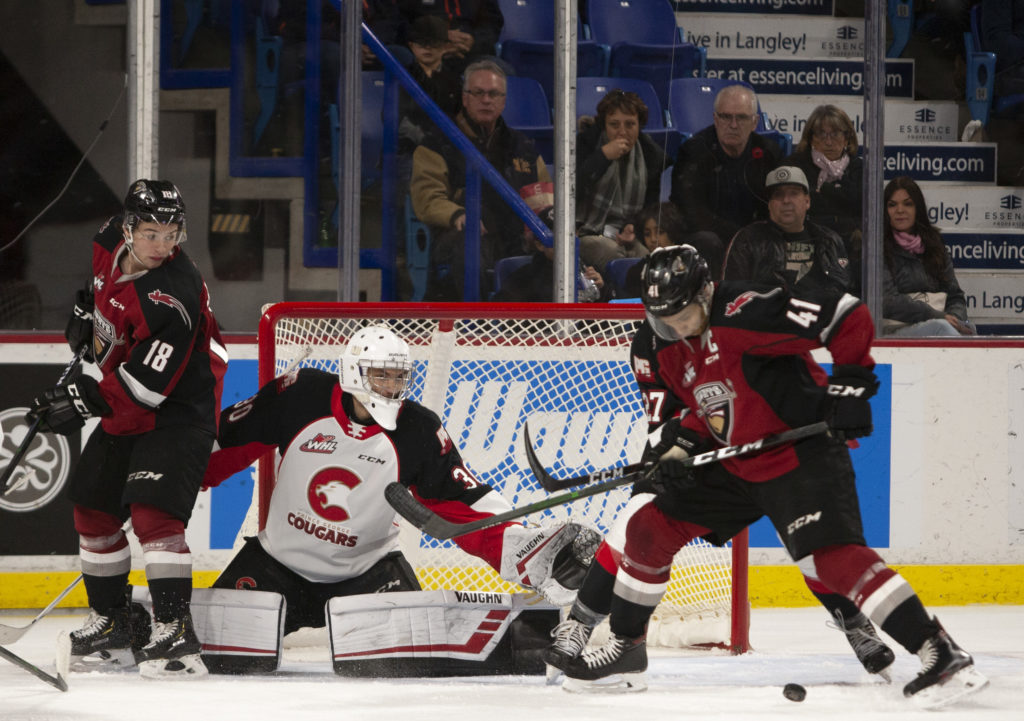 The Prince George Cougars finished the weekend on a high note, beating the Vancouver Giants 3-2 in overtime Sunday afternoon at the Langley Events Centre.

Ryan Schoettler scored the overtime winner, with just 30-seconds remaining in the extra frame, as the Cougars ended their four-game losing streak. Reid Perepeluk and Ilijah Colina also scored in regulation. Tyler Brennan made his second career start and earned his second career win, stopping 37 of 39 shots en route to be named the game’s first star.

The Cougars lead 2-0 through the opening 20-minutes but the Giants battled back in the second scoring twice to even it up through two periods.

Prince George’s penalty-kill played a key role in the victory, as the Cougars held the Giants to one power-play goal on eight opportunities. The Cougars killed-off four-straight penalties in the third period to preserve a 2-2 tie through 60-minutes.

Brennan was the main story on Sunday. The 16-year-old was stellar, including in the third period where he made arguably a candidate for the save of the season off of the Giants’ Milos Roman. On a delayed penalty against Prince George, Roman had the puck bounce right to him at the side of the goal where he looked to have an open net to shoot at. Brennan, sitting on his backside, reached to his left and snatched Roman’s rebound attempt off the goal-line with his glove.

On the last rush of OT, it was Josh Maser setting up Schoettler for the game-winner. Maser moved down the left-wing before dishing off to the trailer Schoettler, who hammered the puck over Trent Miner’s glove.

Game Notes: Taylor Gauthier did not dress due to a lower-body injury he sustained Saturday in Tri-City. Gauthier will be reevaluated in Prince George this week. Brennan is now 2-0-0 is his young career, with a 2.08 goals-against average and a .924 save percentage. He is now off for the World Under-17 Hockey Challenge in Medicine Hat, AB. Ilijah Colina returned to the lineup after sitting out Saturday’s game with an upper-body injury.

Next Up: The Cougars (4-9-0-1) go back on the road to face the Kelowna Rockets next Friday, November 1st. The following night they go south to face the Spokane Chiefs. Both games are at 7:05 pm. Fans can listen to the game on 94.3 the GOAT, or they can watch both games at Brown’s Socialhouse in Prince George.