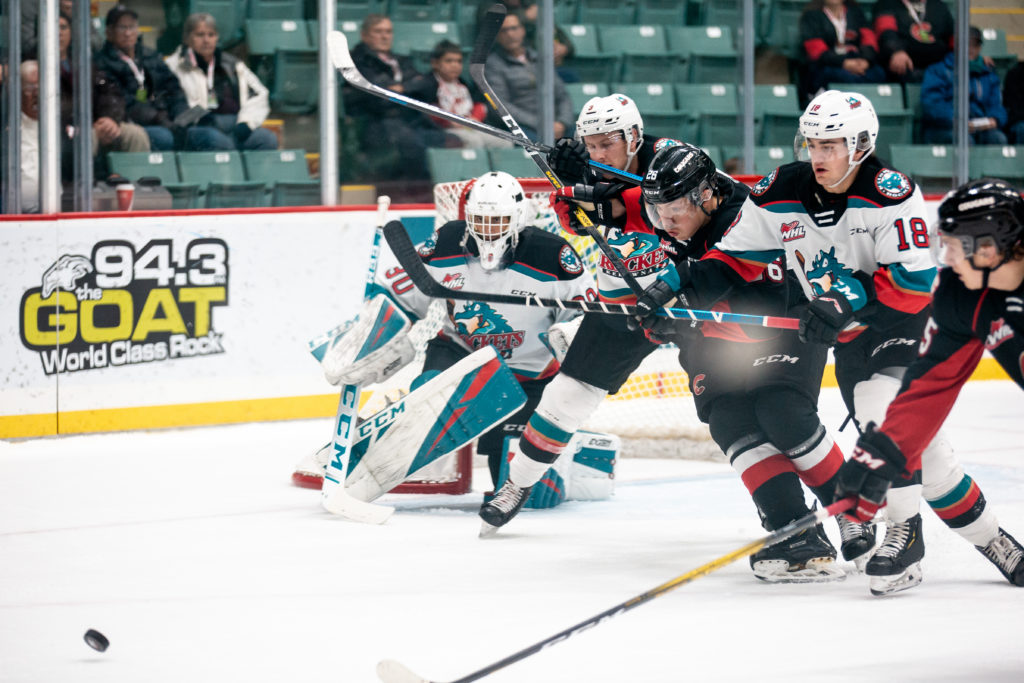 The Prince George Cougars fell 4-2 to the Kelowna Rockets in their final game of a four-game home stand on Tuesday night at the CN Centre.

The Rockets’ Liam Kindree scored the game-winner late in the second period, short-handed, to break a 2-2 tie. It was the Rockets’ first short-handed goal of the season. Trevor Wong, Leif Mattson, and Nolan Foote also scored for the visitors. Roman Basran picked up the win, stopping 33 shots.

Wong opened the scoring on the power-play in the first, then Mattson scored his first of the season on a partial breakaway midway through the opening frame, to stake the visitors to a 2-0 lead. Originally, Mattson’s goal was waved off but upon further review he was credited with the Rockets’ second of the period.

The Cougars did come back from a 2-0 first period deficit, getting power-play goals from Ilijah Colina and Josh Maser. Colina scoring in the final minute of the first period to make it 2-1, and Maser scoring early in the second period to tie the game. For Colina, that was his first goal of the season since returning from injury. Taylor Gauthier suffered the loss in net, stopping 30 of 34 shots.

Down a goal in the third period, the Cougars could not manufacture a tying marker, as the Rockets held the home team to just four shots. Foote put the game out of reach with an insurance marker with just over two-minutes remaining.

Game Notes: Colina’s goal was not only his first of the season but first since January 22nd, 2019 when he scored against Moose Jaw. The two power-play goals for Prince George snapped a 1-for-15 stretch over their last five games. After the loss Wednesday, the Cougars record against the B.C. Division is 1-5-0-1.

Next Up: The Cougars (3-8-0-1) hit the road for two games this weekend. Prince George is in Kennewick, WA to take on the Tri-City Americans (6-5-0-0) before travelling back across the border to take on the Vancouver Giants (7-7-0-0) on Sunday afternoon in Langley. Fans can listen to both games on 94-3 The GOAT FM, or they can watch the two games at Brown’s Socialhouse in Prince George.