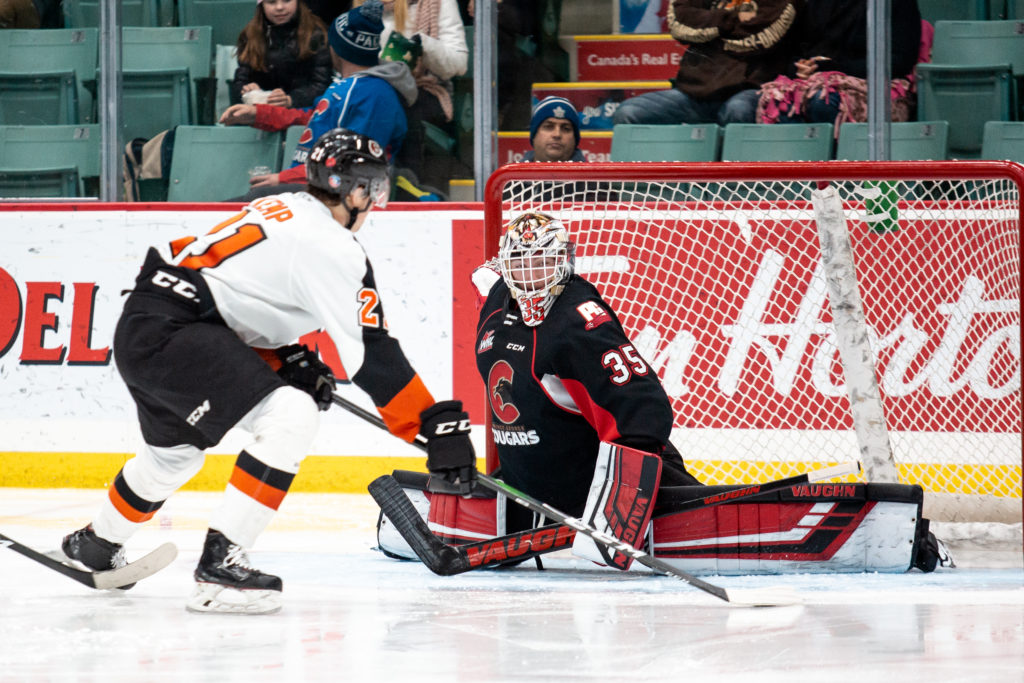 The Prince George Cougars fell 5-4 to the Medicine Hat Tigers on Wednesday night at the CN Centre in Prince George.

Cougars’ defenceman Cole Moberg scored twice for the Cougars and finished with three points in a losing effort. Mitch Kohner and Jack Sander scored the other two goals for Prince George. Ryan Schoettler chipped in with two assists. Both of Moberg’s goals came on the man-advantage as did Sander’s. Taylor Gauthier suffered the loss in net, surrendering five goals on 29 shots.

The Cougars led 1-0 after 20-minutes and 2-0 early in the second, but the Tigers roared back with five unanswered goals in less than nine minutes in the middle stanza to take a 5-2 lead into the intermission. The second period didn’t sit well with the Cougars’ coaches.

“In the second (period) we turned the puck over too much, we didn’t win any one-on-one battles. We lost our work ethic, our composure. We went up 2-0 but didn’t come out and play after that,” commented General Manager & Head Coach Mark Lamb post-game.

James Hamblin led the Tigers with two goals and Parker Gavlas and Nick McCarry each had two assists. Tyler Preziuso, Brett Kemp, and Baxter Anderson also scored for Medicine Hat. Garin Bjorklund stopped 24 of 28 shots to pick up the win in the Tigers’ crease.

Down 5-2 in the third period, the Cougars clawed back to make it a one-goal game. Cole Moberg scored his second of the game two and a half minutes in, on the power-play, to make it 5-3. Then, during a five-minute power-play, Jack Sander blasted a slap shot over the goalie’s pad midway through the frame to make it 5-4. However, the comeback bid fell a goal short.

Next Up: The Cougars (4-12-0-1) continue their home stand against the Victoria Royals (7-7-1-0) in a weekend doubleheader Friday and Saturday; both games start at 7:00 pm. Single game tickets start at $13 and are available at the Treasure Cove Casino box office, or online at www.ticketsnorth.ca