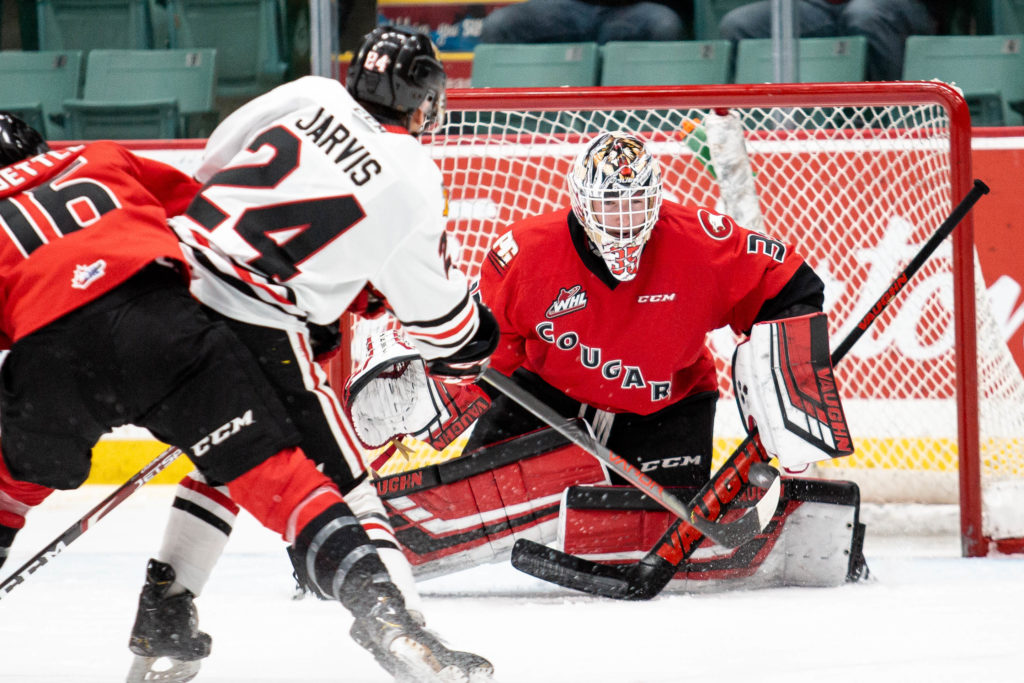 The Prince George Cougars were shutout in their return to home ice Tuesday, falling 3-0 to the Portland Winterhawks at the CN Centre.

Winterhawks’ Joel Hofer stopped 20 shots as he posted his third shutout of the season, and Portland got goals in each of the three periods from Reece Newkirk, Seth Jarvis, and Jake Gricius. Jarvis and Gricius were named the first and second stars respectively.

Taylor Gauthier was saddled with the loss in the Cougars’ net, as he turned aside 30 of 33 shots but was named the game’s third star. He was the Cougars’ top performer Tuesday.

After scoring nine goals in a weekend sweep against the Kamloops Blazers just over a week ago, the Cougars have now been held to just two goals in their last two games. Tuesday was the fourth time Prince George has been held off the scoresheet

Portland opened the scoring 12-minutes into the opening frame after Newkirk scored on a pass out from the corner by Jarvis. Newkirk one-timed the feed past Gauthier’s glove. The Winterhawks outshot the Cougars 16-5 in the first 20-minutes.

Before that goal, Prince George had a chance to open the scoring, but Hofer made a great rebound save to take away a goal Vladislav Mikhalchuk. Hofer jetted out his left leg to deny Mikhalchuk at the side of the goal after he initially stopped Josh Maser’s shot from the slot.

The Winterhawks used the power-play to add to their lead in the second. Jarvis picked up his second point of the night after finishing off a three-way passing play down low. Johnny Ludvig found Jarvis at the top of the crease for the tap in at 7:50 to make it 2-0.

The visitors wasted little time adding to their lead in the third period, as Gricius scored just 34-seconds into the final frame to finish off the scoring. Gricius scored from the face-off circle after being set up on a cross-ice pass by Jarvis.

The Cougars had their chances in the third period, but Hofer stopped all 12 shots he faced in the final frame.

Game Notes: The Winterhawks’ top-line of Seth Jarvis, Jake Gricius, and Reece Newkirk combined for seven points. Tuesday was the first time the Cougars have been shutout at home this season. It was a milestone night for Connor Bowie, who played in his 100th career regular season game.