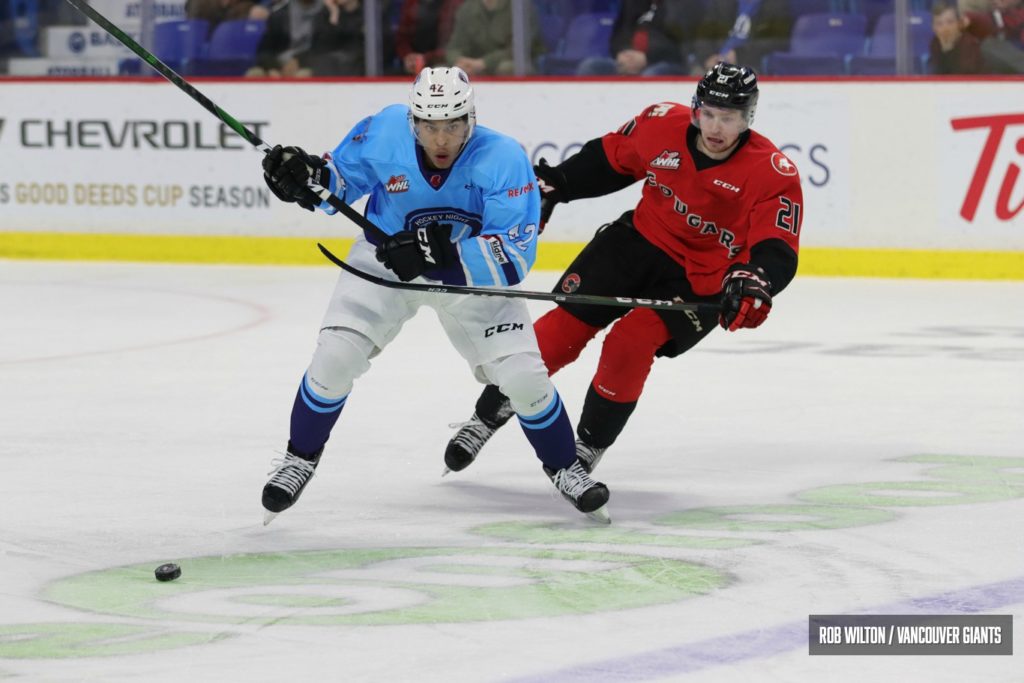 The Giants, with the win, extended their win streak to five games and they have now picked up points in six straight games. Saturday was Vancouver’s fourth win in six games against Prince George this season.

Mitchell Kohner and Vladislav Mikhalchuk scored for the Cougars in a losing cause. Taylor Gauthier had his personal four game win streak come to an end after he turned aside 29 of 34 shots. The Cougars’ power-play went 1-6 and the penalty-kill was 2-3.

The Cougars trailed throughout the game and were down by two goals twice before shaving the Giants’ lead to one each time. However, Vancouver pulled away in the third period, scoring the only two goals in the final 20 minutes.

Katzalay opened the scoring five minutes into the game, redirecting a shot through the pads of Gauthier. Then, midway through the first period, it was Preziuso doubling the Giants lead after he scored during a four-on-four sequence at 12:42.

Kohner cut the deficit in half, as he won a race  to the puck in the Giants’ zone and beat Miner five hole on a partial breakaway at 15:36. Kohner’s seventh of the season coming in front of his parents who made the trip up from Minnesota.

Vancouver restored their two-goal lead midway through the middle frame after Sourdif came off the wall and beat Gauthier over the glove 13-minutes into the frame.

Mikhalchuk responded with a power-play goal at 15:53, not even three minutes after Sourdif’s goal. Mikhalchuk blasted a one-timer through Miner’s pads from the slot for his seventh to make it 3-2 after two periods.

Prince George came painfully close to tying the game early in the third period but both Cole Moberg and Jonny Hooker hit the post on a power-play.

Bafaro added an insurance marker midway through the final stanza, after his shot from the blue line found its way in underneath Gauthier’s pad. Roman capped off the scoring with a power-play goal from the face-off circle at 12:53

Game Notes: Saturday’s loss dropped the Cougars’ record to 2-4-0-0 against the Giants this season, and their road record slipped to 6-14-2-2. Ilijah Colina extended his point streak to five games with an assist Saturday. He has six points (2-4-6) in those five games. Ethan Browne left the game in the first period and did not return; he will be a game time decision Sunday.

Next Up: The Cougars (16-27-3-4) face the Seattle Thunderbirds (20-24-3-3) tomorrow in Kent, WA; the puck drops at 5:00 pm. The Cougars are seven points back of the Thunderbirds for the final wildcard playoff spot in the Western Conference. Fans can listen to the game on 94.3 The GOAT, or they can watch at Brown’s Socialhouse in Prince George.