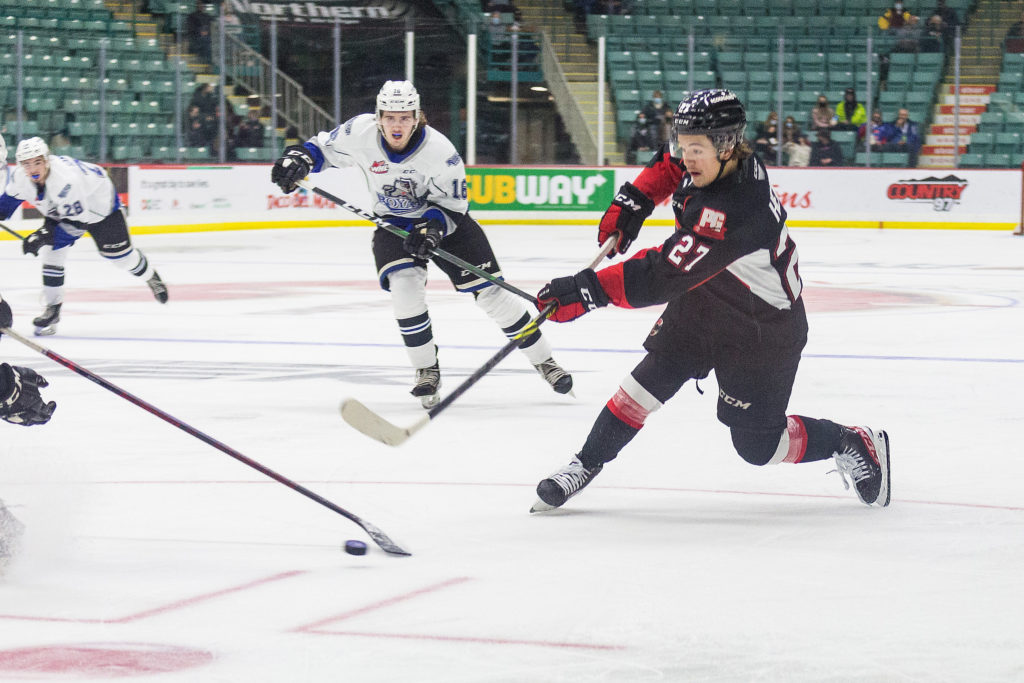 The Prince George Cougars picked up their first win on the 2021-22 season, with a 3-1 victory of the Victoria Royals at the CN Centre on Saturday night.

Riley Heidt scored the game-winner with less than five-minutes left in regulation, as the Cougars earned their first win at home as well. Jonny Hooker scored in the second and Fischer O’Brien added an empty-net goal. Viliam Kmec had a pair of assists in the win and was named the first star.

Taylor Gauthier made his second start and he stopped 22 of 23 shots for his first win of the season and he was named the third star.

Tanner Scott scored the Royals’ lone goal in the middle frame and rookie netminder Tyler Palmer suffered the loss in net, as he turned aside 29 of 31 shots.

Scott did open the scoring in the second for Victoria as he capitalized on a turnover at the Royals’ blue-line. The speedy forward went down the other way and scored over Gauthier’s glove at 6:20.

Prince George pulled even late in the middle frame as the captain found the back of the net again. Hooker scored his fourth goal in as many games as he wired a slapshot past Palmer’s blocker from the circle at 14:09.

A Riley Heidt rebound beauty has the @PGCougars up late! pic.twitter.com/Lzt4EkGIly

The Royals only dressed 15 skaters and it appeared the Cougars capitalized against some tired legs in the third period. The Cougars took advantage of an extended shift in the offensive end, and it was Heidt pouncing on a rebound at the top of the crease at 15:52. Viliam Kmec let go the one-timer and the rebound came right to Heidt who bagged his second goal of the season. The 16-year-old now has seven points (2g-5a) from his first four games. Prince George outshot Victoria 17-9 over the final 20-minutes.