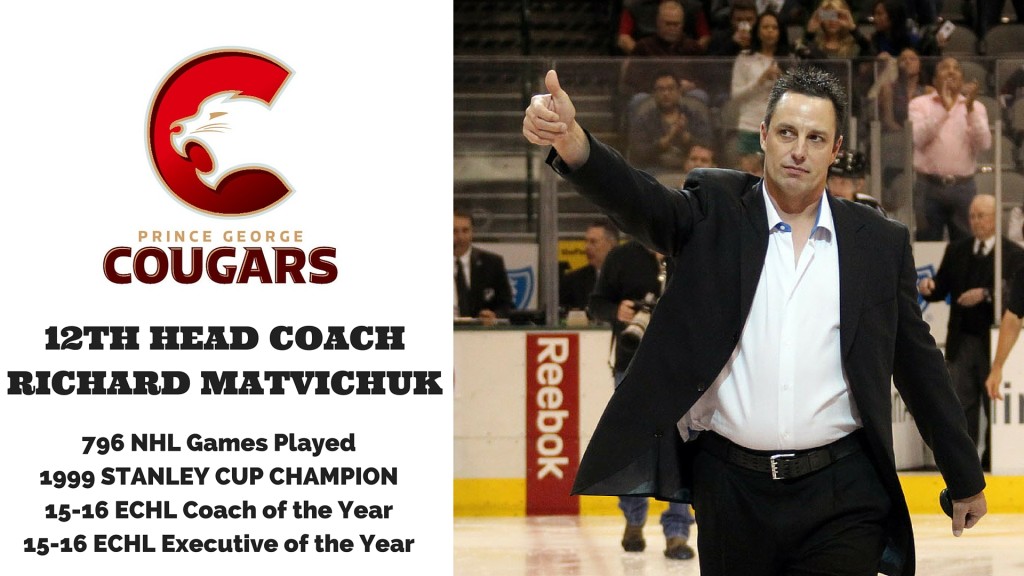 Matvichuk, 43 (2/5/1973), spent the past two seasons as the Head Coach and the Director of Hockey Operations for the Missouri Mavericks of the East Coast Hockey League. In 2015-16 Matvichuk led the Mavericks to the Brabham Cup title as the ECHL’s regular season champions. Their record was 52-15-5 (109 points), a 44 point improvement compared to a season prior. For his efforts, Matvichuk was named both the ECHL Coach of the Year and the ECHL Executive of the Year. Previously he spent two seasons with the Allen Americans (2012-13 and 2013-14) as the Assistant General Manager and Assistant Coach where he helped guide them to back-to-back league championships.

Originally selected eighth overall by the Minnesota North Stars in the 1991 NHL Entry Draft, Matvichuk spent 14 seasons in the National Hockey League. His impressive career included stints in Minnesota (1992-93), Dallas (1993-2004) and New Jersey (2005-2007). During the 1998-99 season, he played an integral part in helping the Dallas Stars win their first and only Stanley Cup Championship. His NHL career consisted of 796 career regular season games, 39 goals, 139 assists and 624 penalty minutes. He also suited up in 123 playoff games where he registered an additional five goals, 19 assists and 128 penalty minutes. Internationally he represented Canada at both the 2002 World Championships and the 1992 World Juniors. He’s also no stranger to the Western Hockey League having spent three seasons with the Saskatoon Blades (1989-1992). In 182 career WHL regular season games, Matvichuk posted 35 goals, 100 assists and 369 penalty minutes. He also added three goals, 17 assists and 77 penalty minutes in 32 WHL playoff games.

“My family and I couldn’t be more excited to be here. It’s an opportunity we are looking forward to, and a challenge that we have accepted. This is a perfect fit,” said Richard Matvichuk. “Our goal is to get everybody on the same page, hold everybody accountable and we have one goal in mind and that is to win.”

“Bringing Richard Matvichuk to the Prince George Cougars truly is a game-changing moment for our organization,” comments Prince George Cougars General Manager, Todd Harkins. “He meets all of the criteria that I set out to find when this search began. He is a passionate and tireless worker, an excellent communicator and he understands what it takes to not only get to the highest level of hockey, but to win at the highest level.”

Harkins adds, “From the very beginning of the interview process I have been so impressed by Richard’s professionalism, his attention to detail and the depths that he has gone to familiarize himself with our players and our community already. I have no doubt that he is the man to lead our franchise to our greatest successes yet.”

The Cougars couldn’t be happier to welcome Richard, his wife Tracy and their three sons: Cole, Dalton and Dillon to Northern British Columbia and the Prince George Cougars family!