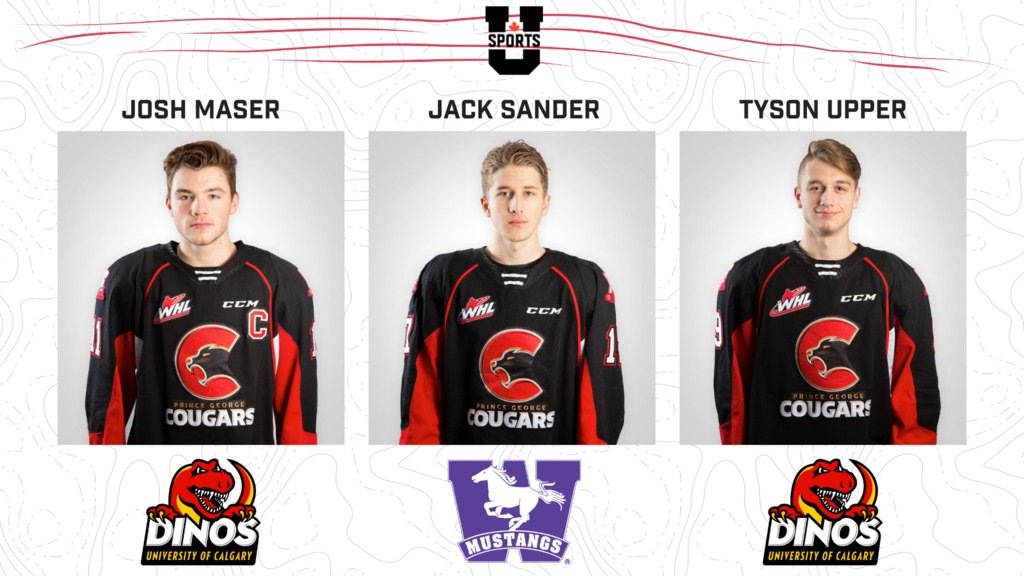 Three former Cougars are continuing their hockey careers upon graduating from the Western Hockey League (WHL). Josh Maser, Jack Sander, and Tyson Upper have committed to U SPORTS men’s hockey programs ahead of the 2021-2022 season.

Maser and Upper will both suit up for the University of Calgary Dinos in the the Canada West conference, and Sander has committed to the Western Ontario Mustangs in Ontario University Athletics (OUA).

It’s a reunion for the teammates who last played together during the 2019-20 WHL Regular Season. A year ago, Maser, 22, played with the Iowa Wild in the American Hockey League and their ECHL affiliate the Allen Americans. The product of Houston, BC played four seasons in the WHL between Prince George and Prince Albert. In 218 career regular season games, Maser amassed 90 goals and 143 points.

Upper, 19, played in all 22 games during the 2020-21 B.C. Division Hub season. Upper was eligible to play in the WHL this season but an opportunity to play at home was too good to pass up, “I am excited to start my new chapter at U of C. Being able to get my education while playing great hockey is an opportunity I couldn’t turn down. My four years in Prince George were the best years of my life and I am so thankful for my billets, coaches, staff, and teammates.” In his four years with the Cougars, Upper suited up in 151 regular season games and had 51 points (18g-33a).

Sander, who served as the Cougars’ Captain last season, embarks on a new adventure out east at the University of Western Ontario in London. The 21-year-old played four seasons and 203 games in the WHL. The Beaumont, AB product collected 47 points (9g-38a) during his four-year WHL career.

Maser, Upper and the Dinos open their Canada West schedule on October 15th against Manitoba. Sander and Wester Ontario have to wait a bit longer, as their OUA schedule kicks-off on November 5th against Wilfrid Laurier.