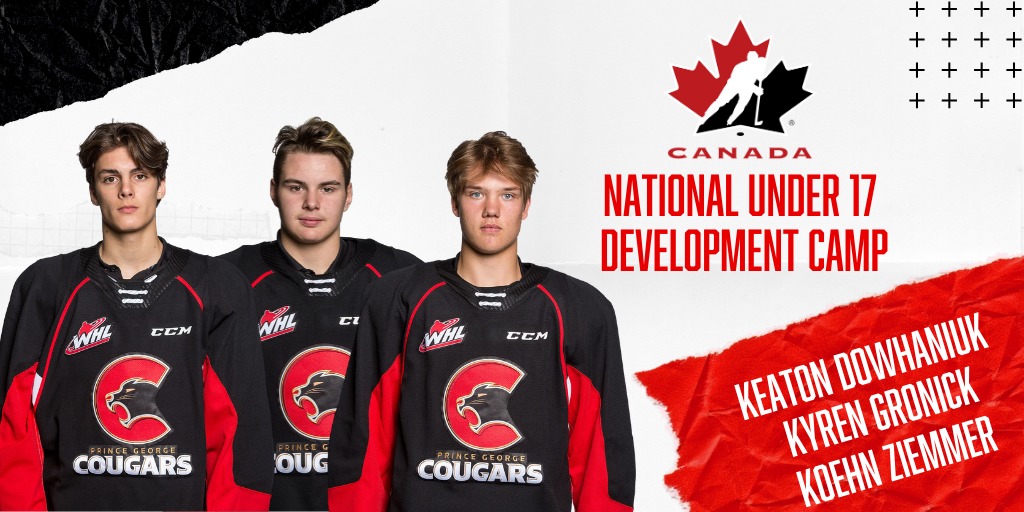 The three prospects are among 113 players invited to the virtual development camp set for July 19-25. Three Canadian teams (Black, Red, White) will compete at the 2020 World Under-17 Hockey Challenge.

“The National Under-17 Development Camp is the first stage in introducing these athletes to the Program of Excellence, and it is a great opportunity for them to develop as players and learn what it takes to wear the maple leaf,” said Scott Salmond, Senior Vice-President of national teams with Hockey Canada.

Dowhaniuk is one of 37 defencemen to be named to the camp roster. The product of Sherwood Park, AB played last season at OHA Edmonton in the Canadian Sports School Hockey League. At the Midget Prep level, Dowhaniuk compiled 22 points (5g-17a) in 25 games to go along with 62 penalty minutes. Dowhaniuk had one assist in eight games with the Cougars last season, and he made his Western Hockey League (WHL) debut on December 7, 2019 against the Portland Winterhawks. The 6’0”, 155-pound defenceman was drafted by the Cougars in the first round, third overall, in the 2019 WHL Bantam Draft.

Gronick is among the 64 forwards taking part in the virtual camp. Last season, the Regina, SK native played for the Regina Pat Canadians in the Saskatchewan Midget AAA Hockey League. The 5’11”, 175-pound centerman was fourth in team scoring and his team’s top rookie scorer after he compiled 35 points (8g-27a) in 25 games. He was second on his team in playoff scoring after he amassed 13 points (5g-8a) in six games. Gronick was drafted by the Cougars in the second round, 26th overall, in 2019 WHL Bantam Draft.

Ziemmer played for the St. Albert Raiders AAA in the Alberta Midget Hockey League last season. The product of Mayerthorpe, AB averaged a point per-game and was fourth in team scoring after he accumulated 26 points (15g-11a) in 26 games. The 6’0”, 175-pound winger led his team in playoff scoring with 11 points (5g-6a) in 6 games. Ziemmer played in two games with the Cougars last season and made his WHL debut on December 8, 2019 against the Winterhawks. Ziemmer was drafted by the Cougars in the first round, fourth overall, in 2019 WHL Bantam Draft.