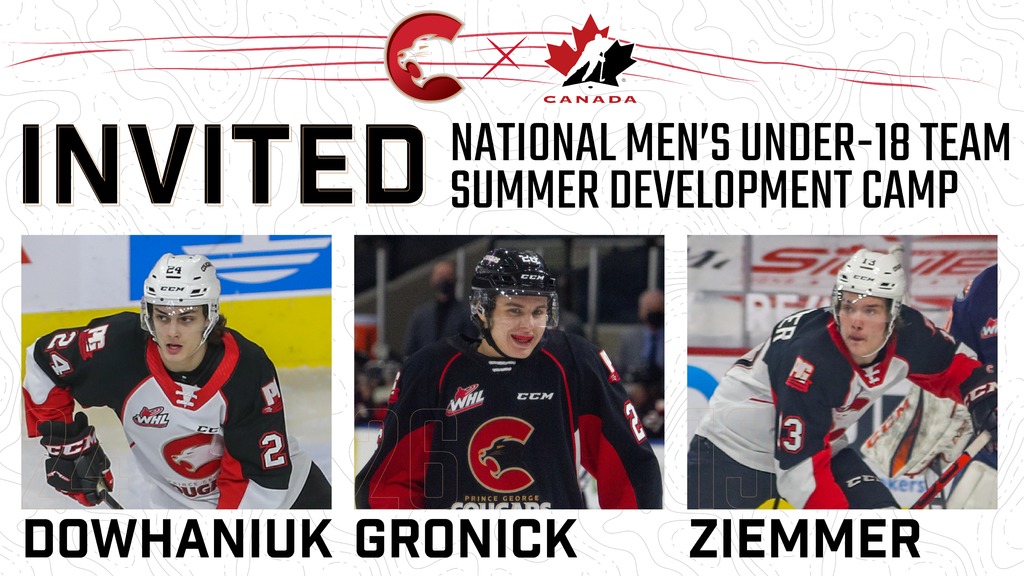 The three Cougars are among 45 players invited to the camp, which runs July 25th-August 4th at the Seven Chiefs Sportsplex on the Tsuut’ina Nation near Calgary, AB.

Dowhaniuk is one of 14 defencemen invited to the camp. The Sherwood Park, AB product registered eight points (3g-5a) in 22 games during the 2020-21 B.C. Division Hub season. Dowhaniuk was fourth among defencemen in scoring on the Cougars’ roster. During the 2019-20 season, Dowhaniuk played for OHA Edmonton Prep in the Canadian Sport School Hockey League and complied 22 points (5g-17a) in 25 games. Dowhaniuk was drafted by the Cougars in the first round, 3rd overall, in the 2019 Western Hockey League (WHL) Prospects Draft.

Gronick posted 11 points (5g-6a) in 17 games during the 2020-21 B.C. Division Hub season. The Regina, SK product finished fifth in points and goals on the Cougars’ roster. Gronick started the 2020-21 season with the Regina Pat Canadians in the Saskatchewan Male U-18 AAA Hockey League. He posted 14 points (3g-11a) in just seven games before the season was cut short due to the COVID-19 pandemic. Gronick was drafted in the second round, 26th overall, in the 2019 WHL Prospects Draft.

Ziemmer was named the WHL’s B.C. Division Rookie of the Year after he amassed 12 points (9g-3a) in 22 games. His nine goals was tops on the Cougars’ roster and third among rookies in the WHL. Prior to the B.C. Division Hub season, Ziemmer posted nine points (4g-9a) in just three games with the St. Albert Raiders U-18 AAA in the Alberta Elite Hockey League.

“This stage of our Summer Showcase is about bringing together the top U-18 players in Canada to work and learn from an elite-level coaching staff, giving them the necessary skills for their hockey development to grow and succeed,” said Alan Millar, Director of Player Personnel for Hockey Canada. “We have an opportunity to connect with the players through on- and off-ice sessions to give them the tools that will only enhance their skill set as they advance through our program and prepare for the upcoming season.”

The summer camp is typically used to evaluate and select Canada’s roster for the Hlinka Gretzky Cup, but Canada will not participate in this year’s event due to the ongoing COVID-19 pandemic.