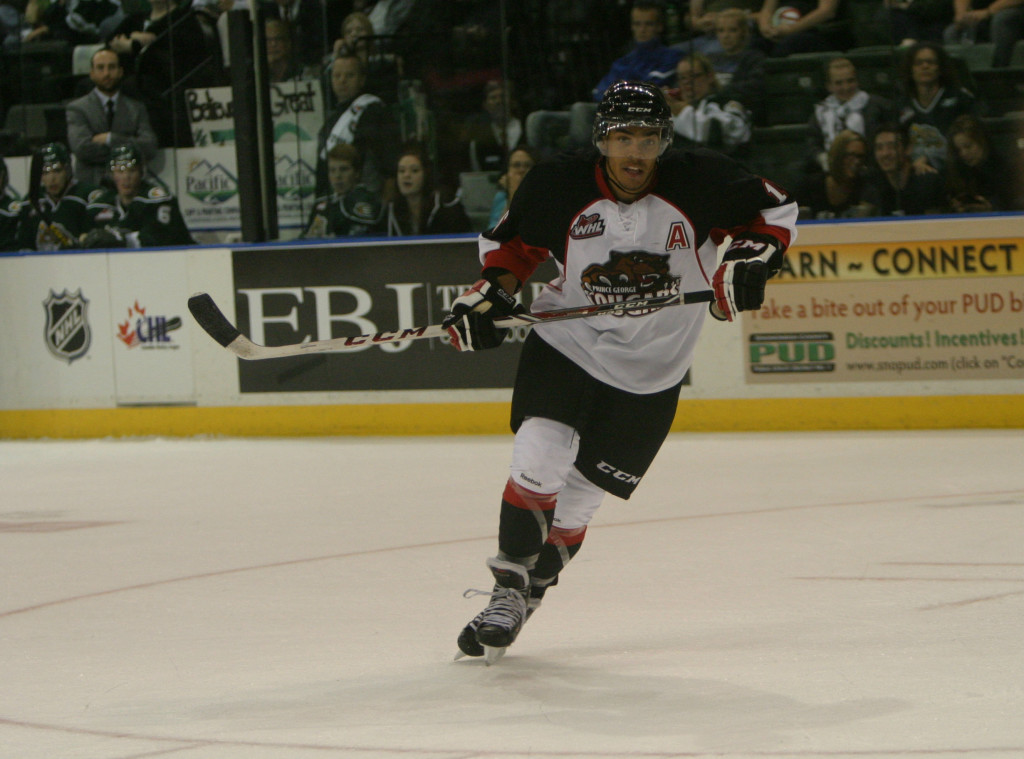 For the final 40 minutes on Wednesday night the Prince George Cougars played a strong game. Unfortunately they had a 4-0 deficit to try and overcome after the first period which proved to be just out of reach. The Cougars were able to get back within one goal, but ended up on the losing end of a 5-4 score in Victoria. Ben Walker had two assists for the Royals while Chase Witala responded with a goal and two assists for Prince George.

41 seconds into the game, Victoria took a 1-0 lead. Brandon Fushimi followed up a Jack Walker shot and potted the rebound past Brett Zarowny for his fifth goal of the season.

Luke Harrison increased the Royals lead at 2-0 at 10:08 of the first right off a faceoff in the Cougars zone.

Penalties then reared their ugly head and the Royals took full advantage.

First it was Austin Carroll who lifted a backhander over the shoulder of Zarowny to make it 3-0 Victoria. That goal spelt the end of the night for Zarowny who was pulled after surrendering three goals on 14 shots.

Tyler Soy then converted his power play chance at 17:55 to give the Royals the 4-0 lead. Victoria outshot the Cougars 16-5 in the first and appeared to be in complete control.

Early in the second, the Cougars got on the board when Chase Witala skated down the left wing and beat Patrik Polivka with a hard low shot. For Witala it was his fourth goal of the season.

Early in the third, the Cougars swarmed the Victoria goal but were unable to score. Patrik Polivka made a number of marvelous saves, including a huge stop on Klarc Wilson who was denied on a two-on-one chance.

Moments after the save off of Klarc Wilson, the Royals regained a two goal lead thanks to some breakaway heroics of Logan Nelson.

Less than a minute later the Cougars responded when Jansen Harkins knocked home his own rebound. But unfortunately the comeback stopped there.

Patrik Polivka kept the door shut from then on out and Victoria held on to a 5-4 victory. The final shot tally was 28-28. Victoria finished two-for-seven on the power play while the Cougars went one-for-six.

The loss moves the Cougars record to 5-6-0-1 while the Royals improve to 8-5. The Cougars will continue their four game road trip on Friday night in Seattle against the Thunderbirds.