About the Prince George Cougars Society 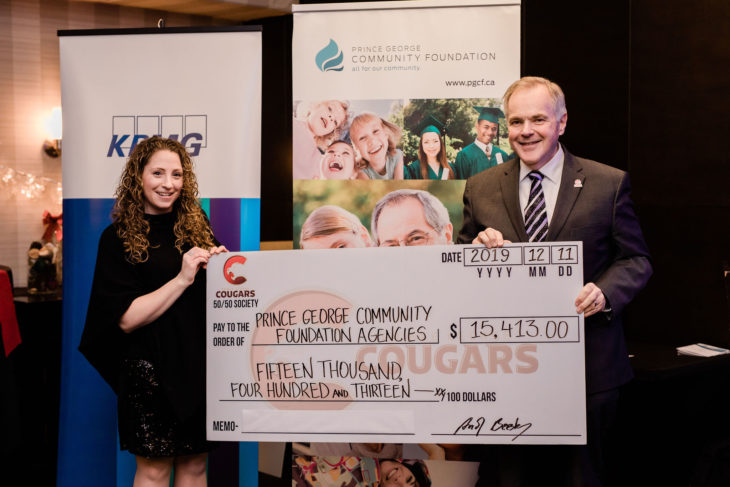 The $15,413, through the PG Community Foundation, was awarded to Hope Air, Spinal Cord Injury BC, Carney Hill Neighbourhood Centre and the YMCA of Northern BC at our Fall Grant Reception last week.

In October, the PG Community Foundation was the sponsor of the Cougars’ 50/50 Society Mega 50/50 Jackpot for Oktoberfest Night. 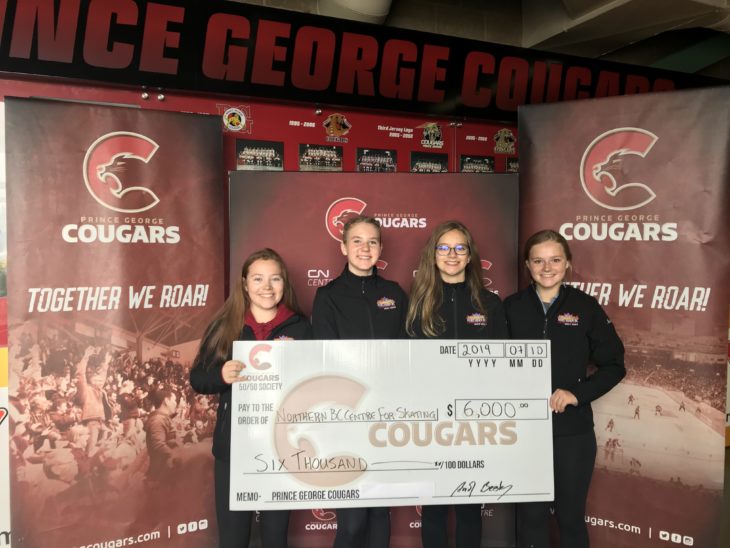 The Prince George Cougars 50/50 Society recently presented the Northern B.C. Centre for Skating a $6,000 donation. The donation will go towards funding for their programs through the winter and summer.

Northern BC Centre for Skating is British Columbia’s third and newest Skate Canada designated Skating Centre. NBCCS offers Skate Canada skating programs that complement each other and allow for unrestricted movement and development through the system.

The Cougars are thankful for the volunteer support from the Northern B.C. Centre for Skating!

The Prince George Cougars 50/50 Society recently presented the Canadian Cancer Society of Northern B.C. with a $3,000 donation that will help reduce fees for patients staying at Kordyban Lodge. The Canadian Cancer Society Kordyban Lodge provides accommodation for 36 out-of-town residents receiving medical treatment at the Cancer Agency Centre for the North in Prince George.

“We’re very happy to have a great relationship with the Canadian Cancer Society,” commented Director of Business & Game Operations Iain Scott. “They are a huge pillar of our community and we are just thrilled to help donate to their efforts for those affected by cancer.”

The Cougars’ organization is very grateful for all the volunteering work the Salvation Army does at Cougars’ games throughout the season.

The Prince George Cougars’ 50/50 Society recently presented Big Brothers Big Sisters of Prince George (BBBSPG) with a $1,500 donation. BBBSPG Executive Director Tim Bennett was on hand to accept the donation. The donation will go towards a variety of BBBSPG programs, including their one-to-one Community Program and School program. The money will be a big boost to their programs, which typically each have a budget of $2,000.

BBBSPG is a valued partner of the Cougars and several of their members volunteer regularly throughout the hockey season. The Cougars are proud to partner with BBBSPG and look forward to continuing to build their relationship. 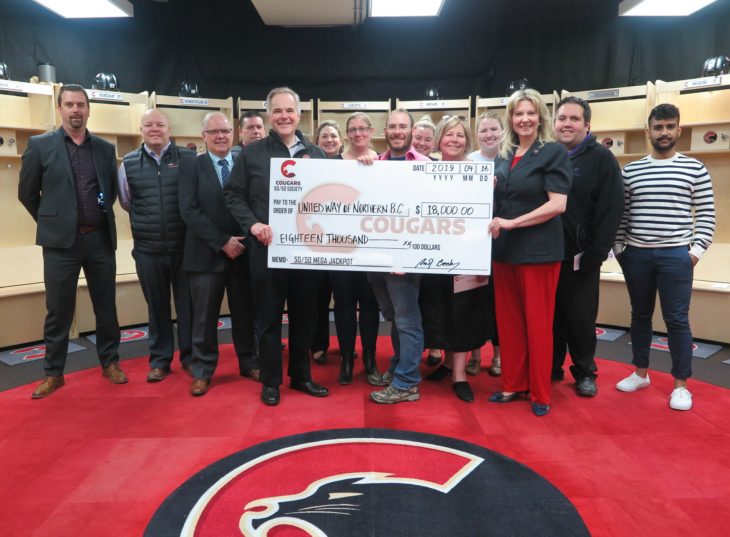 The Prince George Cougars Society presented the United Way of Northern B.C. with an $18,000 donation on Tuesday afternoon, that will make a significant impact in our community.

“The Prince George Cougars Society is honoured to have been able to donate hundreds of thousands of dollars over the past few years to support a wide variety of charities, none more deserving than the United Way of Northern BC and the many important agencies under their umbrella,” said Cougars Vice-President, Business Andy Beesley.

“The Cougars look forward to many more years of supporting our community and we’ll be soon announcing more mega jackpots for next season.”

The Cougars and the United Way of Northern BC partnered for a very successful Mega 50/50 Jackpot on March 9th. The jackpot of nearly $40,000 would not have been possible if it wasn’t for the generous sponsorship of Mr. Mike’s Steakhouse and Wood Wheaton GM Supercentre.

“We are so grateful to have partnered with the Prince George Cougars for this exciting event. The money raised will provide funding to multiple organizations in the United Way Family of Charities. In reality, many organizations can’t market or fundraise on their own and depend on United Way to raise awareness on the impact they have in our community,” commented Roberta Squire, CEO of the United Way of Northern BC.

“Thank you to the Prince George Cougars, our sponsors Mr. Mikes and Wood Wheaton for helping those that need it the most.”

In the last four years the Prince George Cougars Society has donated in excess of $631,000 to various local charities and community groups. 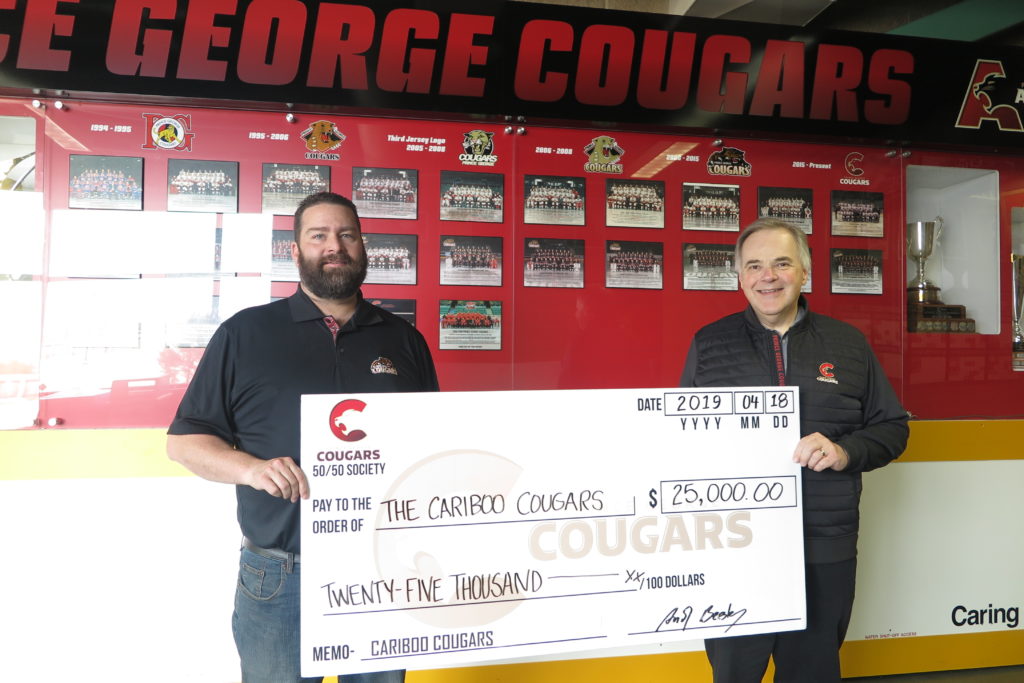 The Prince George Cougars Society presented the BC Major Midget League’s Cariboo Cougars with a $25,000 donation on Thursday.

“Our organization is incredibly proud to be a major contributor to our community as we put all of our fundraising effort back into helping local agencies and non-profit groups, said Cougars’ Vice President, Business Andy Beesley. “The Cariboo Cougars are a great development program here in Northern B.C. and we look forward to continuing to support them in the years to come.”

Over the past five years, the Cougars Society has donated over $150,000 to the Cariboo Cougars. The donations go to helping with operating costs, including primarily funding their annual trip to the Mac’s Midget AAA World Invitational Tournament in Calgary, AB.

The two organizations have a strong relationship in development also, as Brett Connolly, Brogan O’Brien and Chaste Witala are just a few who have graduated the Cariboo Cougars program and have gone onto play for the Cougars in the Western Hockey League. Current forwards Josh Maser and Reid Perepeluk both graduated from the Cariboo Cougars program. Prince George had three prospects on the Cariboo roster this past season in John Herrington, Matthew Magrath and Fischer O’Brien.

During the 2016/2017 season the Prince George Cougars collaborated with seven different organizations throughout Prince George. Those organizations provided the Cougars with our volunteer force for thirty-six regular season games and through the playoffs.

We would like to offer our most sincere thank you to the following groups: Rotary Club of Prince George, Salvation Army, United Way of Northern BC, Immaculate Conception School, Big Brothers Big Sisters of Prince George, Canadian Cancer Society and the BC SPCA North Cariboo District Branch.

Our game nights would not run as smoothly without the help of the hundreds of gracious people who took time out of their busy lives to help out our organization on countless occasions! 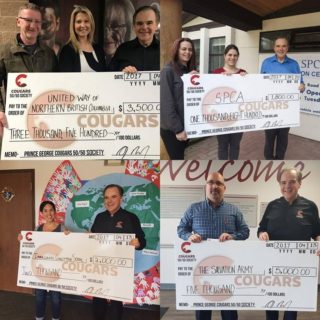 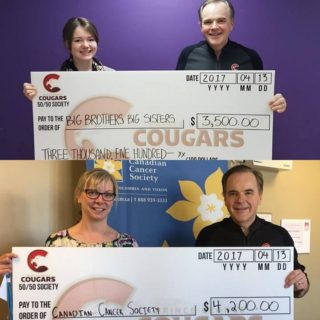