LAST GAME: The Prince George Cougars suffered their sixth shutout loss in their 4-0 loss Wednesday against the Brandon Wheat Kings. Brandon’s Chad Nychuk, Duncan Pierce, Connor Gutenberg, and Marcus Sekundiak scored. Goaltender Jiri Patera stopped all 21 shots he faced. The Cougars’ Taylor Gauthier stopped 37 of 41 shots in the defeat. The power-play went 0-4 and the penalty-kill was 5-6. Their record on their six-game East Division road trip slipped to 1-2-1-1.

TONIGHT: Tonight, is the Cougars 43rd game of the season and their record is 11-24-3-4, sitting fifth in the B.C. Division. They’re eight points out of a wildcard playoff spot in the Western Conference. This is their first and only game against the Moose Jaw Warriors in the regular season. These two teams lat met January 22nd, 2019  in Prince George where the Warriors edged the Cougars 3-2 in overtime. Tonight, is the Cougars’ first trip to Moose Jaw since February 3rd, 2018. Last night was the first time since December 8th the Cougars have lost back-to-back games in regulation.

RECENT HISTORY: Tonight, is the first and only meeting between these two teams in the WHL regular season. The Cougars went 2-3-1-0 against the East Division last season. A season ago, the Cougars fell 3-2 [OT] to the Warriors on January 22nd at the CN Centre in Prince George. Ilijah Colina and Vladislav Mikhalchuk scored in regulation for Prince George. The Cougars fell 4-1 to the Warriors in their last visit to Mosaic Place on February 3rd, 2018. The Cougars are 2-2-1-0 in their last five trips to Moose Jaw dating back to the 2009-2010 season.  On their last East Division road trip during the 2017-2018 season, Prince George went 1-4-0-1 in the six games.

SCOUTING REPORT: The Moose Jaw Warriors are in a transition phase. 10 of the 22 players on their roster have been acquired via trade this season. 12 of 22 are 17 years-old or younger and they were sellers at the WHL Trade Deadline. The big move was sending Anaheim Ducks’ draft pick Brayden Tracey and goaltender Adam Evanoff to the Victoria Royals in five-player deal. Four drafts also went back to the Warriors, including a first-round selection in 2021.

The Warriors have lost four in a row and eight of their last nine but this isn’t a team the Cougars can afford to take lightly. The Warriors do have dangerous players in their line up, including 20-year-old Owen Hardy and 17-year-old Ryder Korczak. Korczak leads the team in scoring with 44 points (12-32-44) in 38 games. Hardy is second with 28 points (18-10-28) in 37 games.

Moose Jaw also went through a coaching change last week, as Tim Hunter was let go and Mark O’ Leary was promoted to Head Coach. O’Leary had been with the organization for eight seasons before the promotion. With the coaching change comes evaluation and the Warriors will be a motivated group down the stretch, as they are playing for roster spots next season.

WHL TRADE DEADLINE: The Cougars made a pair of moves on the eve of the WHL Trade Deadline. The Cougars acquired defenceman Majid Kaddoura (01), prospect Jayden Watson (03), and a first-round WHL Bantam Draft selection in 2020 from the Saskatoon Blades, in exchange for defenceman Rhett Rhinehart (01) and a third-round WHL Bantam Draft selection in 2020. They also acquired forward Jonny Hooker (01) from the Brandon Wheat Kings in exchange for forward Reid Perepeluk (00). Kaddoura is in his second season in the WHL and played in 36 games with the Blades this season and had 10 points (2-8-10). Hooker is in his third season and has 13 points (8-5-13) in 38 games with the Wheat Kings. Both Hooker and Kaddoura made their Cougars debut last Friday in Prince Albert.

LINE UP: Taylor Gauthier starts again in goal. He made 37 saves in the shutout loss to Brandon Wednesday. Defenceman Cole Moberg, who left Wednesday’s game with a lower-body injury, is a game-time decision. Moberg did skate Friday morning. Ethan Browne has missed the last two games but he did skate Friday morning and will also be a game-time decision.

COUGARS’ FOCUS: A good start. All 11 wins have come when the Cougars’ have scored first. They’re 11-6-1-3 when doing so. The Warriors are 9-7-1-0 when they score first, as opposed to 2-16-0-0 when they don’t. It will be important for the Cougars to not only score first but play with the lead and dictate the game. Make the Warriors play from behind.

Recap: Silvertips break through in third period to top Cougars
1 day ago 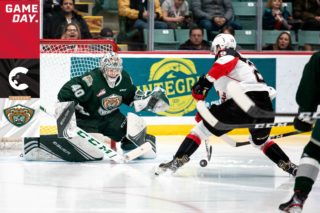 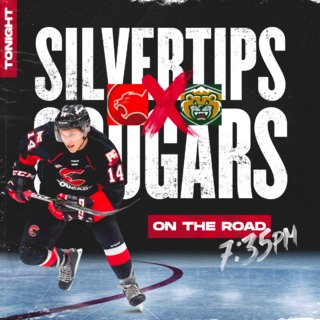