LAST GAME: The Prince George Cougars settled for a weekend split with the Tri-City Americans on Saturday, after their 3-2 loss at the CN Centre. Jonny Hooker and Vladislav Mikhalchuk scored in a losing effort. Tyler Brennan was tagged with the loss in net, stopping 21 of 24 shots. The Americans scored all three of their goals on the power-play. The Cougars went 0-4 on the man-advantage. The Cougars finish with a 1-3-0-0 record against the Americans this season.

TONIGHT: Tonight, is the Cougars 48th game of the season and their record is 14-26-3-4, sitting fifth in the B.C. Division. They’re 10 points out of a wildcard playoff spot in the Western Conference. Tonight, is their first of four games against the Seattle Thunderbirds, the team they’re chasing for the final playoff spot in the Western Conference. In fact, three of the four games in the season series will be played over the next six days. These two teams meet again tomorrow night, before hooking up again on Sunday in Seattle. The Cougars are 5-9-1-0 against the U.S. Division. The Thunderbirds are 3-7-1-0 against the B.C. Division.

NEXT UP: The Cougars face the Thunderbirds tomorrow at the CN Centre to conclude their six-game home stand. Then they go on the road for two games this weekend against the Vancouver Giants and Thunderbirds on Saturday and Sunday respectively. The Cougars are back home February 15th against the Calgary Hitmen.

LINE UP: Taylor Gauthier is back between the pipes for the Cougars. The 18-year-old is coming off a 5-1 win on Friday against Tri-City. Through 35 games this season Gauthier has nine wins, a 2.87 goals-against average and owns a .917 save percentage. He was 4-2-1-1 in January with a 2.21 goals-against average and a .940 save percentage. The Calgary, AB product was named the WHL Goalie of the Week for the week ending January 26th. Likely no other line up changes for Associate Coach Jason Smith, who’s taking charge behind the bench tonight. General Manager & Head Coach Mark Lamb is in Las Vegas for the WHL meetings. Director of Player Development, Steve O’Rourke, will be on the bench tonight.

COUGARS’ FOCUS: A good start. Prince George surrendered the first goal in both games last weekend to Tri-City. Both Prince George and Seattle play much better when ahead. All but one of the Cougars’ wins have come when they’ve scored first and they’re 10-4-1-3 when leading after the first period. The Thunderbirds are 12-1-0-1 when leading after the first period, but have just one win in 13 games when trailing after 20-minutes. After playing from behind last weekend, and with the importance of these two games, Prince George needs to get off on the right foot.

AROUND THE WHL: The Vancouver Giants host the Trip-City Americans in other B.C. Division action. Spokane visits Portland in an all U.S. Division battle. 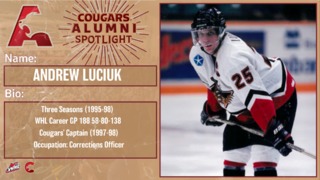 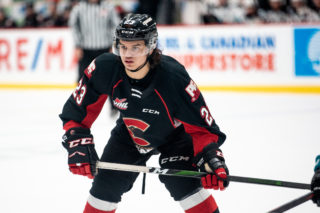 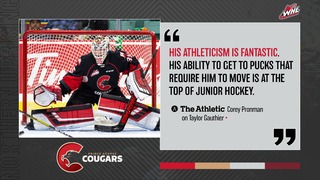 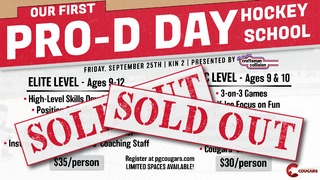